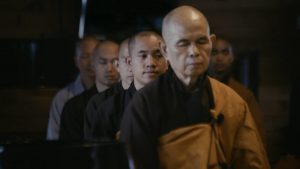 Sunday, October 11th, 2020, was Thich Nhat Hanh’s (Thay’s) 94th birthday, or as he likes to call them, his 94th continuation day. Born in 1924 in the imperial city of Hue in central Vietnam, Thay was attracted as a child to a spiritual life. When he was 16, he ordained as a novice at the Tu Hieu Temple in Hue. He received full ordination when he was 25, In 1966, when he was 39, he received Lamp (Dharma teacher) Transmission from the Abbot of Tu Hieu Temple just before he left for a speaking tour to explain to Americans the deep suffering caused by the war in Vietnam. As a poet, writer, teacher, activist, and mentor Thay has shared his practice and insights with others, first in Vietnam, then in the West, and for the past several decades, worldwide.

This Thursday and Friday Evenings we will celebrate Thay’s continuation day by reflecting on his words and actions that have touched us, helped us, or transformed us. We invite you to share: perhaps a moment on a retreat with Thay, perhaps something from his writing, perhaps something you heard or saw in a video, or even something you received through another practitioner, such as a teaching they learned from Thay.

We’ll start our sharing with a video segment from Chan Phap Hữu, the Abbot of the Upper Hamlet at Plum Village – France, in which he fondly remembers Thay’s teaching and practice of “Everything is going to be ok.”

Chan Phap Hữu’s words reminded me of an edifying moment in 1999 during a three-week trip with Thay and 180 other practitioners to honor the Chinese roots of our practice. Midway through our journey we flew into Nanking. After disembarking we walked in small groups through an empty terminal. Just as I was about to step onto an escalator to descend to the baggage area, I noticed Thay and some monastics walking behind me. I stepped back and raised my palms to my chest, to honor Thay and allow him to go first. As he passed, he took hold of my arm and pulled me along with him onto the escalator.

Going down the escalator I felt a swell of gratitude for Thay and for the many things I had learned on the trip. When we got to the bottom, Thay was still holding my arm and we walked together toward the baggage conveyor. I started to tell Thay how grateful I was, but before I got out two sentences, Thay turned to me and said, “Present moment, wonderful moment.” I immediately understood the subtext: “Mitchell, please be quiet and just enjoy this moment.” We walked on another 100 feet, then Thay turned so we could bow to each other, and then he walked away with slow mindful steps. I looked straight ahead and saw little groups of monastics and lay people chatting around the not-yet-moving baggage conveyor. “Hmm,” I thought. “If this is a good time for Thay to be practicing walking meditation, it is probably a good time for me, too.” So I went off in the opposite direction from Thay, taking unhurried, mindful steps. I slowly walked the perimeter of the immense arrival room, mindful of my breath and my steps.

Some minutes later, on the other side of the hall, I noticed that Thay had also continued to walk and was approaching. When we got close, we again bowed to each other. To my surprise, Thay wanted to talk. Perhaps it was because I was so much calmer. We chatted a bit about the trip, then Thay told me that in China it was both possible and not possible for him to communicate directly with others. In his root monastery all the monks studied Sino-Vietnamese in order to read the Chinese sutras and commentaries. (The Chinese ideograms were read as Vietnamese words.) While he could not understand a word of Mandarin, he could read signs and write notes. He then demonstrated by reading some words off an electronic announcement board on the other side of the terminal. Our conversation ended after a few minutes, and we both continued with our walking meditation. I realized immediately that I had just received a precious teaching about mindfulness in daily life. However, it took me some time to realize I had been instructed first by a fierce Bodhisattva and then by a gentle Bodhisattva.

You are invited to join us this Thursday and Friday evenings.

In the reading below Thay remembers a heart-opening moment he had with his teacher just before his monastic ordination.

My monastic ordination at Tu Hieu Temple was scheduled for four o’clock in the morning. The night before, after chanting practice, I saw my teacher sitting in his room on a cushion beside the light of a flickering candle; there was a stack of old scriptures piled high on a table next to him. He was carefully mending a tear in an old brown robe. Despite his old age, he still had clear vision and a straight posture. Brother Tam Man and I stopped at the entrance and watched. As he slowly pulled the needle through the cloth, my teacher looked like a bodhisattva in deep meditation.

After a moment, we entered the room and my teacher looked up. Seeing us, he nodded and then lowered his head to continue sewing a half-sewn stitch. Brother Tam Man spoke: “Respected teacher, please go and rest; it is already very late.”

My teacher did not look up. “Let me finish sewing this robe so that Quan can wear it tomorrow morning.”

Then I understood why my teacher had been sorting through his pile of old robes all afternoon; he was looking for the least worn robe to fix and make presentable for me. Tomorrow for the first time I would wear a brown robe. During the past three years as aspirants, we were only allowed to wear the gray robe. Once ordained as a novice, I would be allowed to put on the precious robe that the sutras call the robe of liberation, the uniform of freedom.

In a wavering voice I said, “Respected teacher, let us ask Auntie Tu to finish the sewing.”

“No, I want to sew it for you with my own hands,” he replied softly.

With our arms folded in an obedient manner, we stood to one side not daring to say another word. A little later, without raising his eyes from the needle, my teacher spoke.

“Have you heard the story in the sutra about a great disciple during the time of the Buddha who attained enlightenment just from sewing robes?

“Let me tell it to you,” he continued. “This disciple often found joy and peace in mending torn robes; he mended his own and also those of his Dharma brothers. Each time he passed the needle through the fabric, he gave rise to a wholesome goodness that had the power to liberate. One day, when the needle was passing through the fabric, he gained insight about a most deep and wonderful teaching, and in six consecutive stitches he attained the six miraculous powers.”

I turned my head and looked at my teacher with deep affection and respect. My teacher might not have attained the six miraculous powers, but he had reached a profound stage of understanding and insight.

At last the robe was mended. My teacher signaled for me to come closer. He asked me to try it on. The robe was a little too large for me, but that did not prevent me from feeling so happy that I was moved to tears. I had received the most sacred kind of love—a pure love that was gentle and spacious, which nourished and infused my aspiration through my many years of training and practice.

My teacher handed me the robe. I received it knowing it was tremendous encouragement and that it was given with a tender and discreet love. My teacher’s voice at that moment was probably the gentlest and sweetest I had ever heard:

“I mended this myself so that tomorrow you will have it to wear, my child.”

It was so simple. But I was deeply moved when I heard these words. Although it wasn’t yet time for the ordination ceremony and I was not yet kneeling before the Buddha, uttering the great vow to save all beings, my heart made the vast and deep vow with all sincerity to live a life of service. Brother Tam Man looked at me with wholehearted affection and respect. In that moment, the universe for us was truly a universe of fragrant flowers.

Since that day, I have had many new robes. The new brown robes are given attention for some time but later on they are forgotten. But the old torn brown robe from my past will always remain holy. Today, the robe is too torn to be worn, but I still hold on to it so that in moments of reflection I can look back on the beautiful memories of the past.