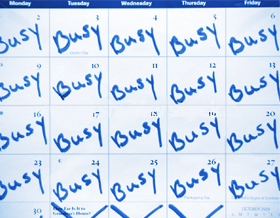 How do you deal with what theologian Kirk Byron Jones calls our society’s “addiction to hurry”? Jones writes:

When hurry becomes a chronic condition, when we run even when there is no reason to, when we rush while performing even the most mundane tasks, it may be said that we have become addicted to hurry.

I think that describes much urban life, and in particular Washington DC, and I’m certain it describes my own experience. This week has been stuffed with blessings. Stuffed. I’ve been rushing from one to the next. I can’t keep up. I’m too tired to appreciate them. So why don’t I just slow down? That’s the key question.

Deep down, I act as though I believe that if I cram my life with events and accomplishments I will be more real … more significant, more important. In my mind, this has a whole vocabulary that justifies it: “living a life filled with purpose,” “sacrificing myself for a cause”, “dedication to your goals.” I have swallowed hook line and sinker the notion that the important person is the busy person.

And deeper down, there is the flipside: my fear of living without a goal or direction; of being stuck and unable to move forward; of being unseen, in a place where life just rushes by and no one takes the time to notice me.

How do you experience our society’s pressure to fill life with activity?

Do you feel it at all? Do you ever feel you’re less important in the world because your life isn’t filled?

How does it affect you? Does it have a particular narrative in your head?

How do you manage it? Or not?

Maria Sgambati and I will be leading the sit on Thursday, and we are eager to hear what you have learned.

Thich Nhat Hanh in Peace is Every Step connects this tendency to hurry to a Western habit of setting goals. As an antidote, he suggests “aimlessness.”

In the West, we are very goal oriented. We know where we want to go, and we are very directed in getting there. This may be useful, but often we forget to enjoy ourselves along the route.

There is a word in Buddhism that means "wishlessness" or "aimlessness." The idea is that you do not put something in front of you and run after it, because everything is already here, in yourself. While we practice walkingmeditation, we do not try to arrive anywhere. We only make peaceful, happy steps. If we keep thinking of the future, of what we want to realize, we will lose our steps.

And Kirk Byron Jones, who wrote, Addicted to Hurry: Spiritual Practices for Slowing Down, has a number of suggestions. One struck me as simple and poignant:

Resist the impulse to hit the "door close" button in elevators. (This button is usually the most worn on the elevator panel — a sure sign of our culture’s addiction to speed.) This simple act of relaxation and nonaggressiveness could add immeasurably to the peace of the world.

We hope to see you on Thursday.

A related quote from Thich Nhat Hanh is below.

If You Want Peace, Peace Is With You Immediately

From Peace is Every Step by Thich Nhat Hanh

Twenty years ago, I wrote four Chinese characters on a paper lampshade: “If you want peace, peace is with you immediately.” A few years later, in Singapore, I had the chance to practice these words.

It was 1976, and several of us were conducting an operation to rescue boat people in the Gulf of Siam. The project was called, “When blood is shed, we all suffer.” At that time, not many people knew about the presence of the boat people, and the governments of Thailand, Malaysia, and Singapore would not allow them to land on their shores. The practice was to push the boat people back out to sea so they would die, and those on land would not have to deal with them. . . .

We had to find a way for 800 people to travel safely to Australia or Guam. The Saigon 200 and the Blackmark were not allowed to leave port to take food and water to the refugees on the Leapdal and the Roland. The Roland had enough fuel to reach Australia, but we needed to get food to them. Then its engine broke down. The day was very windy and the sea quite rough, and we worried about their safety, even just drifting offshore. But the Malaysian government would not allow the ship to enter Malaysian waters. I tried to get permission to enter a neighboring country in order to continue the rescue operation, but the governments of Thailand, Malaysia, and Indonesia would not grant me an entry visa. Even though I was on land, I too was drifting on the sea, and my life was one with the 800 refugees on the ships. There were more problems than seemed possible to solve in just twentyfour hours.

I decided to practice the meditation topic, “If you want peace, peace is with you immediately,” and I was surprised to find myself quite calm, not afraid or worried about anything. I was not just being careless. This was truly a peaceful state of mind, and in that state, I was able to overcome this difficult situation. The idea came to me to ask the French Embassy to intervene on my behalf so that my visa would be extended for a few more days, enough time to tie up all of these loose ends. And at five minutes before noon, just as the Immigration Department was about to close for the weekend and I would have to leave the country, the extension was granted. As long as I live, I will never forget those seconds of sitting meditation, those breaths, those mindful steps during that night and that morning. Success came when I faced the problem directly. I vowed that if I could not have peace at that moment, I would never be able to have peace. If I could not be peaceful in the midst of danger, the kind of peace I might realize in easier times would not mean anything. Practicing the topic, “If you want peace, peace is with you immediately,” I was able to resolve many problems one after another.

We had to hand the refugees over to the United Nations High Commissioner for Refugees, who kept them for months and years in the camps in Malaysia. It was very painful. Yet we had conducted our operation in prayer. and meditation, because we knew that everything depended on our mindfulness. We did sitting meditation late into the night every night, then recited the Heart Sutra, as if we were in a monastery. 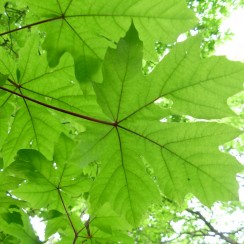