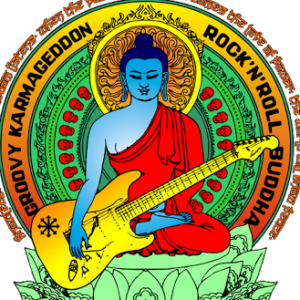 One of my favorite Zen stories is about Suzuki Roshi, the founder of the San Francisco Zen Center, looking out at a group of his students in the 1960s and saying to them “Each of you is perfect the way you are, and, you can use a little improvement.” For me, his sentence wonderfully captures a central paradox of mindfulness practice: we are encouraged to be just who we are and, also, encouraged, to use a phrase of Thich Nhat Hanh, “to purify, subdue, and transform our mind.” How do we manage both? This Thursday evening Shawna Donaldson will open our Dharma sharing by relating some of the concerns and questions she’s encountering as she deepens her practice:

I like to listen to rock and roll. I like to watch tv and go to movies. These things were a great escape for me as a kid who had a lot of scary things going on in her life.

Nowadays I really enjoy meditation and living a sober peaceful life. A few years ago I took Mitchell’s Smiling Like a Buddha class. One of the results of that class was a new willingness to become a daily meditation practitioner. I had been meditating for a long time but had never been able to create a regular daily practice. I’m exploring the idea of taking my practice deeper. Currently I very consistently practice 10 minutes a day as well as for longer times on Thursday evenings and at Days of Practice. I also keep a gratitude journal. My dedication to quality sobriety, meditation, and gratitude have resulted in me having a really nice life. In fact I have a life beyond what I would have ever hoped for years ago.

My struggle comes in when I get the feeling that some of the things I listen to or some of the tv shows I watch go against my Buddhist principles. The 5th Mindfulness Training asks me to look deeply at my consumption. I take that to include the music I listen to and the programs I watch. The reason I like some of the music and programs that I do is the feeling of connection to humanity it provides. Although I don’t experience the heartbreak described in a rock anthem so much these days, I sure have been there. I don’t like the violence I see when the heroine in a zombie show kills her opponent to save her friends, but I wonder how I would behave under extreme catastrophic conditions. The other part of tuning in to pop culture that I like is that it offers a means of connection with younger people, family members, and non-Buddhists. I don’t want to seem like I’m not approachable and often times the scenarios from shows we have in common keep or get conversations going. So I’m wondering: Can I be a Rock and Roll Buddhist and still be a ” good” Buddhist?

As I aspire to take my practice deeper can I appreciate what pop culture has to offer in the way of exploring my humanity and keeping me connected to people? Or are there some of the things I should give up? I wonder If any of my Still Water friends have struggled with these issues. How have you dealt with them? What motivated you to go deeper with your practice? Are you content with the way things are? How do you connect with family, friends and others who are not Buddhist? Have you given up things you really liked for the sake of your practice? I look forward to what you have to share.

Two related excerpts are below. One is an often told, and probably unfounded, story about a dialogue between William Penn, the founder of Pennsylvania, and George Fox, a founder of the Religious Society of Friends (Quakers).  The other excerpt,  by Thich Nhat Hanh, is about letting change happen harmoniously.

Wearing the Sword
from Brief History of William Penn

There is a widely told, perhaps apocryphal, story that at one time George Fox and William Penn met. At this meeting William Penn expressed concern over wearing a sword (a standard part of dress for people of Penn’s station), and how this was not in keeping with Quaker beliefs. George Fox responded, “Wear it as long as thou canst.” Later, according to the story, Penn again met Fox, but this time without the sword; Penn said, “I have taken thy advice; I wore it as long as I could.”

Drinking Mindfully
by Thich Nhat Hanh from True Love: A Practice for Awakening the Heart

When somebody comes to us and asks if he or she should stop drinking before receiving the five mindfulness trainings (the precepts), we always tell them that they can continue to drink, but they must drink mindfully. If you drink your wine mindfully for a week, and you practice deeply, you will stop drinking after a few weeks. Nothing is forced on you; it is your own understanding, your wisdom, that tells you how to behave, that tells you how to conduct your everyday life. In Buddhism, when we practice five precepts, or ten, or two hundred and fifty, it’s not because the Buddha wants us to do this, but because we are practicing deep looking. We see that practicing the precepts is protecting ourselves against suffering. The precepts are a guarantee of your freedom.