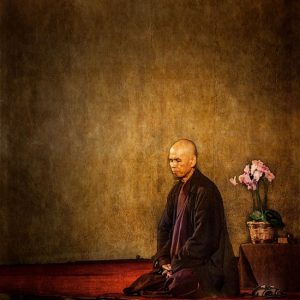 After ninety-five years of life and almost eighty years of monastic practice, Thich Nhat Hanh (Thay) passed peacefully in the presence of his beloved students on Friday, January 22nd, 2022, at his root monastery in Hue, Vietnam. His transition is being mourned and celebrated at Plum Village monasteries and practice centers around the world.

As Thay taught, he did not die in Vietnam. He lives on in his books and videos, and also in the hearts and daily lives of millions of people whose lives he touched and transformed. Thay had an amazing capacity to project presence — in the way he sat and moved, in the tone and cadence of his speech, in the way he wrote on a white board or put down a marker, and in the way he smiled — so that thousands in an auditorium felt it and were calmed and comforted by him. When he talked about suffering and the transformation of suffering, people felt that that he was talking directly to them, that Thay understood exactly what they were struggling with.

Thay was for me an incredible life coach. He had a consistent philosophy of life that began with mindfulness of breath and mindful walking and extended to a subtle understanding of interbeing, the inter-penetration of all life, which he often called “the cream of the Buddha’s teaching.” His every presentation, whether it was how to follow one’s breath, or an extended discussion of the Three Doors of Liberation, transmitted encouragement and confidence. The unspoken message I received was: “It is not that hard. You can do this. Just begin by taking one breath or one step. Embrace your suffering and acknowledge your strengths.”

This Thursday evening we will remember and celebrate Thay’s life. At the beginning of our meditation we will listen to Thay’s voice in the Great Bell Chant.

Our program will begin watching a Q and A from June 21, 2014, in which Thay answers a critical question about his teachings on no birth and no death. This particular teaching from the end of the “What Happens When We Die?” twenty-one-day retreat was one of Thay’s last talks before his stroke. In that retreat, and in many other retreats, Thay offered his students insights concerning how we might understand and hold his death and all deaths:

And when you get that kind of insight, you are light, you are not longer afraid, and you see that everything renews itself all the time. Joy and happiness are possible, the transformation of suffering is possible. And you can help so many people to suffer less, and life has a meaning. You don’t tire yourself out. You don’t get bored because you know that your life has a meaning, your life is useful. And you can generate the energy of compassion and joy in order to help heal the world.

We will begin our Dharma sharing with the questions “How has Thay touched me and transformed me? How does his spirit live on in me?”

Below is an except from No Death No Fear about how Thay came to understand that his mother had both died and not died.

The same thing happens when we lose any of our beloved ones. When conditions are not right to support life, they withdraw. When I lost my mother I suffered a lot. When we are only seven or eight years old it is difficult to think that one day we will lose our mother. Eventually we grow up and we all lose our mothers, but if you know how to practice, when the time comes for the separation you will not suffer too much. You will very quickly realize that your mother is always alive within you.

The day my mother died I wrote in my journal, “A serious misfortune of my life has arrived.” I suffered for more than one year after the passing away of my mother. But one night, in the highlands of Vietnam, I was sleeping in the hut in my hermitage. I dreamed of my mother. I saw myself sitting with her, and we were having a wonderful talk. She looked young and beautiful, her hair flowing down. It was so pleasant to sit there and talk to her as if she had never died. When I woke up it was about two in the morning, and I felt very strongly that I had never lost my mother. The impression that my mother was still with me was very clear. I understood then that the idea of having lost my mother was just an idea. It was obvious in that moment that my mother is always alive in me.

I opened the door and went outside. The entire hillside was bathed in moonlight. It was a hill covered with tea plants, and my hut was set behind the temple halfway up. Walking slowly in the moonlight through the rows of tea plants, I noticed my mother was still with me. She was the moonlight caressing me as she had done so often, very tender, very sweet… wonderful! Each time my feet touched the earth I knew my mother was there with me. I knew this body was not mine but a living continuation of my mother and my father and my grandparents and great-grandparents. Of all my ancestors. Those feet that I saw as “my” feet were actually “our” feet. Together my mother and I were leaving footprints in the damp soil.

From that moment on, the idea that I had lost my mother no longer existed. All I had to do was look at the palm of my hand, feel the breeze on my face or the earth under my feet to remember that my mother is always with me, available at any time.