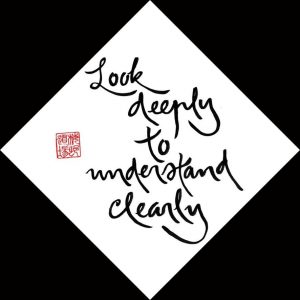 Discovering the Cause of Our Ill-Being

Last week, on Thursday and Friday evenings, we talked about the many ways the pandemic, climate change, and national politics are watering our seeds of anxiety. We also read excerpts from Thich Nhat Hanh (Thay) on embracing and transforming our anxieties, and on how, as skilled mindfulness practitioners, we can offer constructive responses to the challenges facing living beings and our earth.

This week, after our meditation, we will watch a short video by Thay and continue our conversation on the linked practices of taking care of ourselves and taking care of our world. The video comes from a Dharma talk Thay gave at the beginning of the 2008 “Engaged Buddhism for the 21st Century” five-day-retreat in Hanoi, Vietnam.

Thay begins the segment by reminding us that “Engaged Buddhism is a kind of Buddhism that responds to anything that happens in the here and the now.” He then turns to the Four Noble Truths. The traditional way Buddhist teachers talk about ill-being (dukkha), the First Noble Truth, is in terms of old age, sickness, death, loss, and separation. Thay adds to the list contemporary forms of ill-being: “tension in our body, stress, a lot of anxiety, fear, violence, broken families, suicide, war, conflict, terrorism, destruction of the ecosystem, global warming, and so on.”

By applying these insights to our daily lives, Thay teaches we can transform our pressured and hectic lives, help our children to do the same, lovingly communicate with those around us, and address the underlying causes of war and terrorism.

Our Dharma sharing will begin with these questions:

The full talk, “The Definition of Engaged Buddhism,” is available on Vimeo. We will be watching the segment from one hour and nine minutes until one hour and thirty minutes.

A mostly verbatim transcript of the segment is below.

It would be right if we speak about Engaged Buddhism in the term of the Four Noble Truths. The first noble truth is Dukkha (ill-being). In the old time Buddhist teachers speak of the first noble truth, Dukkha, in terms of: old age is suffering, sickness is suffering, death is suffering, separation from those your loved ones is suffering, having to live with those you don’t love is suffering, wishing for something but never obtaining it is suffering. That is the old way of describing the First Noble Truth. But now, as we practice mindfulness we have to identify the kind of ill-being that is really there, in and around us. First of of all there is a tension in our body, stress, a lot of anxiety, fear, violence, broken families, suicide, war, conflict, terrorism, destruction of the ecosystem, global warming, and so on. We should be fully present in the here and the now to realize, to recognize, the real face of ill-being.

The natural tendency is to run away from suffering , from ill-being. We don’t want to confront them, we don’t want to recognize them. That is too much for us. So we try many ways in order to turn from the truth. We try to escape, we try to run away, But the Buddha advises us not to do so. The Buddha encourages us to confront the suffering, to recognize the suffering, to look deep into the nature of suffering in order to learn. His teaching is that if you don’t understand suffering you can not see the path of transformation, the path leading to the cessation of suffering. All of us know that the First Noble Truth is ill-being and the Fourth Noble Truth is the path leading to the cessation of ill-being. Without understanding the First Noble Truth, you will never have the opportunity to see the path leading to the cessation of ill-being. Looking deeply into ill-being you discover the path, that is the teaching of the Buddha. That is why to run away from suffering or ill-being you have no chance to see the path. You should learn to come home to the present moment, to be fully present in order to recognize ill-being as it is. As we practice looking deeply into the First Noble Truth, ill-being, we will discover the Second Noble Truth, the making of ill-being. Looking deeply into ill-being we can discover the Second Noble Truth: craving, hate, ignorance, wrong perception, lack of communication. Each of us has to discover the cause of our ill-being.

Supposed we speak about our hectic life: we have so much to do, we have so much to achieve, as a politician, businessman, even as an artist, we want to do more and more and more. We are craving for success. We do not have a capacity to live deeply each moment of our daily life, We never allow our body to relax in order to heal. That is why our hectic life is the cause of so many tensions, stress, anxiety, and so on.

If we know how to live like a Buddha, dwelling in the present moment, allowing the refreshing and healing elements of life to penetrate, to nourish, and to heal us, then we will not become the victims of stress and tension, and many kinds of diseases. So we can say that one of the roots of ill-being is the incapacity to live our lives deeply in each moment.

We want our children to get to the top, and we push our children to study, to work very hard. Our children become very stressed, at one point they can no longer continue to study. Competition – we want to be number one. Therefore, we should bring spiritual dimension to our daily life, as a politician, as a businessman, as a teacher, as a father, and so on. So the art of mindful living can be seen already as the Fourth Noble Truth.

When we have a lot of tension and irritation in us, we can not listen to the other person, we can not use loving speech, we can not help each other remove wrong perception. Therefore, wrong perception gives birth to fear, to hate, to violence, and so on. We have to identify the roots of ill-being, this is a very important work.

Suppose we speak of suicide and broken families. We know that when communication becomes difficult between husband and wife, father and son, mother and daughter, people are no longer happy. Many young people, because of despair, want to commit suicide. They have the feeling, the emotion of despair. And as they don’t know how to handle the despair, they don’t know how to breath to hold the emotion, they think that the only way to stop suffering is to just kill oneself. In France every year, about twelve thousand young people commit suicide, just because they can not handle their emotions, like despair.

War is also born from wrong perception, terrorism also. The terrorists think that the other side is trying to destroy them as a religion, as a way of life, as a tradition, as a nation. That is why they want to punish. If we believe that the other person is trying to kill us, then we will seek a way to kill that person first in order not to be killed. So there is fear, there is a misunderstanding, there are misperceptions as the foundation of all these violent acts.

We know the war, like the one in Iraq, the war called anti-terrorist, has not helped to reduce the number of terrorists. In fact, the number of terrorists is increasing all the time with the war, because the foundations of misunderstanding and wrong perceptions are the causes of anger, hate, and fear. In order to remove terrorism, we have to remove wrong perceptions. We know very well that fighting with airplanes, guns, and bombs can not remove terrorism, can not remove wrong perceptions. Only loving speech and compassionate listening can help people to correct their wrong perception. And our leaders do not know and were not trained in that discipline. They rely on the armed forces, they rely on the guns and bombs alone in order to remove terrorism. By recognizing the Noble Truth of ill-being, and looking deeply into its nature we can see the making of ill-being and the roots of ill-being.