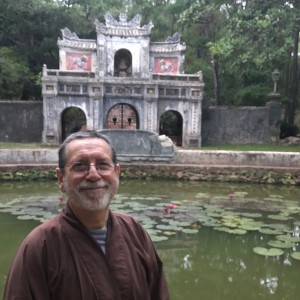 As many of you know, I was away from Maryland for most of the summer, including a month in Vietnam between mid-July and mid-August. About half of that month was in Hue, practicing with the sisters at Dieu Tram Nunnery and the brothers at Tu Hieu Monastery, where Thay (Thich Nhat Hanh) is living. The other half was in Saigon and Hanoi, practicing with lay Sanghas in the Plum Village tradition. (Blog entries with photos and commentary for each day of the trip are at https://smileofthedandelion.wordpress.com.)

When I returned from Vietnam I had a few quiet weeks in a Maine farmhouse.  I asked myself “Was I changed by my time in Vietnam? Is my life different?” As I considered these questions in my sitting and my journaling I realized that there has been a very concrete change: almost every morning after my sitting I now do a simplified form of the Three Touchings of the Earth. It is not something I planned with great forethought. I am simply doing something that feels right to me. As I reflected on this small behavioral change, I saw that the framework of the Three Touchings of the Earth is a helpful way of explaining to myself and others how my time in Vietnam changed me.

The Three Touchings are one of Thay’s many instructional innovations. I remember him describing in the 1990s how they grew out of his own practice. After a daily sitting he would prostrate (touch the earth) three times, and while on the ground he would open his mind and heart to an aspect of who he was. Over the years, the Three Touchings were elaborated into a guided movement meditation. Tthe version Still Water uses is available here. For me, the heart of the Three Touchings is the three simple affirmations or intentions with which they begin, followed by noticing what arises in our hearts and minds.

The first touching: “Touching the Earth, I connect with ancestors and descendants of my spiritual, heart, and blood families.”

While I was in Vietnam I had a new appreciation of my spiritual ancestors.

Since childhood I’ve had many spiritual teachers, though Thay, through his teachings and his encouragement, has influenced me most. Sitting at Tu Hieu Monastery, where Thay ordained as a 16-year-old, and where he returned, as a 93-year-old, gave me a more visceral relation to his life and times. It felt right to include the Buddhist Monk Nhat Đinh, who founded Tu Hieu Monastery in the 1840s, as one of my spiritual ancestors, as well as Thay’s teachers at Tu Hieu and at the other monasteries and schools he attended. And there were many other ancestors that influenced Thay, such as the the the early twentieth century reformulation of Buddhist doctrine and practice that occurred in response to colonialism and modernity, exemplified by the Buddhist monk Taixu in China and the Nhân Gian Phật Giáo (Buddhism for this World) movement in Vietnam.

The second touching: Touching the Earth, I connect with all people and all species that are alive at this moment with me.

The warmth I felt toward my Vietnamese spiritual ancestors extended also to my spiritual contemporaries, especially the monastic sisters and brothers who graciously allowed me to practice with them. I appreciated their dedication and their skillfulness in transmitting the Plum Village tradition of mindfulness practice to a new generation.

This aura of warmth extended also to the Vietnamese lay practitioners I met in Hue, Saigon and Hanoi. Sitting together in a Dharma sharing group, or enjoying a formal tea, my experience was that we were pilgrims on the same spiritual path.

And the whole of Vietnam became more real to me: the sweeping economic transformations, the traffic-jammed cities, the lovely natural landscapes, the environmental challenges, the beauty and grace in unexpected places, and the oddity of having a ruling Communist party seemingly cheerleading entrepreneurship and wealth accumulation.

The Third Touching: Touching the Earth, I let go of my idea that I am this body and my life span is limited.

The second touching is represented by a horizontal “space” line that intersects the first line. This touching directs us to our contemporaries: The people we live with, work with, practice with, and share the earth with. It includes all the great beings and and all the suffering souls. My contemporaries include also the polar bears, the micro algae, and all other manifestations of life. 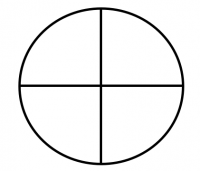 Thay represented the Third Touching with a circle drawn around the vertical “time” line and the horizontal “space” line. For many years I focused on the point of intersection of the historical and the contemporaneous. I saw it as this moment, this day, located in time and space. And the question I asked myself was: How can I live it well?

My time in Vietnam helped me to widen my view, to see the whole circle and everything in it. Inside the circle was all of life and matter evolving together. When I can see myself as the circle, there is nothing I need to ask of myself, nothing I need to do, only to remember: I am this, too. Not only am I the wave, I am also the water.

I look forward to sharing more Vietnam and the Three Touchings this Thursday evening. You are invited to join us.

A related except by Thay from Beyond The Self is below.

Liberating Ourselves
From Beyond the Self by Thich Nhat Hanh

If we continue to be imprisoned by the habit energies of the past, we will never liberate ourselves, nor can we liberate the thousands of generations of ancestors and descendants in us. But if in our daily lives, while we are washing up, cleaning the vegetables, driving the car, working in the garden, or watering the plants, we use that time to truly look at ourselves and each other to see our true nature and the true nature of others, we can gradually get out of the ropes that bind us. Our fear, our sorrow, our complexes are all born from our discriminating ideas of coming and going, self and the other. Looking deeply in our daily life like this is the true work of the practice, the cream of Buddhist teaching. …

When we first come to Buddhism, we can immediately experience mindful breathing and it makes us feel better. There’s a tendency to grasp hold of this and think, “If I can breathe, if I can smile, if I’m able to follow my breathing when I feel a bit angry, then that’s enough already.” This kind of thinking stops us from going deeply into the deep teaching of nondiscrimination that brings us to fearlessness, to the insight that helps us break through all our fetters. That is the greatest gift and the greatest fruit of the practice. If we’re caught in ideas, caught in sorrow, caught in the way other people treat us, then that is a terrible waste of our lives.