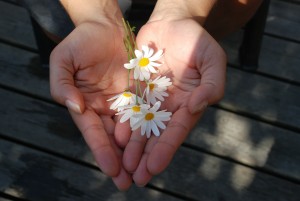 The airport shuttle was late — as I sat down in the air-conditioned van with several other passengers, I worried I would miss my flight to New Mexico to visit my mother for Mother’s Day. Often in the shuttle, no one talks to each other except to say hello, if that. I sat down next to a smiling woman who immediately greeted me, asked where I was going, and started telling me all about herself. At first, I’ll admit, I felt annoyed, I was stressed out about traffic and wanted to silently strategize how I could best reach my plane in time when we arrived at the airport. I did not want to hear a stranger’s complicated life story. But gradually, as I calmed down and began to listen, I grew interested in my seat neighbor.

She was Puerto Rican, and visiting her family for the first time since Hurricane Maria devastated her island home. She told me how her family coped during the storm, and the long months afterward; how her sister’s kitchen was saved from flooding by some neighbor kids who helped pile sandbags outside her back door, and how her mother, who was turning 83, had been an indomitable force but was feeling drained and tired, having now lived for several months without steady electricity. My new friend was going home to live with and help her mother. I told her I was visiting my mother as well, and feared missing my flight and disappointing her. My neighbor asked if she could pray for my safe arrival, then pulled out her rosary and said 10 Hail Mary’s for me as we sat in a sea of stopped cars on the highway. I found her gentle presence and companionship in this moment, as well as her generosity of spirit, uplifting, and noticed my shoulders relax,  even as our driver told me I’d have to run to make my flight. What did it really matter if I missed my flight and took a later one? I would still see my mother soon, and we would enjoy our time together with the benefits of steady electricity, running water, and calm weather. I thought about gratitude, how many times the woman next to me spoke the word  in the midst of relating her challenging stories.

My neighbor was grateful for the support and help she and her family were receiving from friends, neighbors and relatives. She was bringing the money that she’d earned in DC, to aid her family in their hour of need. This was her Dana practice, though she didn’t call it that.

We hear about Dana (the practice of generosity) every week or whenever we attend our Sangha meditation sessions. According to Thich Nhat Hanh, Dana is one of the six Paramitas, or ways of “‘Crossing over to the other shore’ which is the shore of peace, non-fear and liberation.” In The Heart of the Buddha’s Teaching, Thich Nhat Hanh explains about practicing Dana, “To give means first of all to offer joy, happiness, and love. There is a plant, well-known in Asia– it is a member of the onion family and it is delicious in soup, fried rice, and omelets– that grows back in 24 hours every time you cut it. And the more you cut it, the bigger and stronger it grows. This plant represents Dana Paramita. We don’t keep anything for ourselves, we only want to give. When we give, the other person might become happy, but it is certain that we become happy… The greatest gift we can offer anyone is our true presence.”

This Thursday night, the night of the summer solstice in the northern hemisphere, we’ll have our regular sitting practice at Crossings. Then we’ll meditate on  gratitude for all the light and support we give and receive in our lives, and share our experiences of practicing Dana, exploring how we can continue to be open and present with each other in difficult times. You are warmly invited to join us!