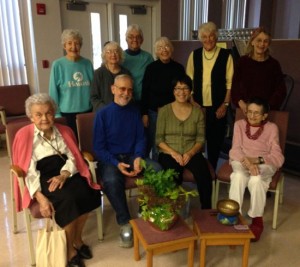 On the first Thursday of September and October we watched segments from a Question and Answer session with Thich Nhat Hanh at the August, 2013, Art of Suffering retreat at Blue Cliff Monastery. This Thursday evening, after our meditation period, we will watch a third video segment from the same Q and A in which two practitioners ask how we as mindfulness practitioners can be more effective in the world.

In the first question a woman concerned about military intervention in Syria asks Thich Nhat Hanh what he might say to President Obama, if he were the president’s spiritual advisor.

The second question comes from a man who has worked for the past 12 years for the United Nation disarmament program helping combatants return to civilian life after an armed conflict. He explains that young combatants in Somalia, where he is now working, are often recruited by Al Qaeda, which offers them respect and a cause, as well as an income. “How might we design programs to convince them to come toward peace, to put down their guns?

In replying to both questions, Thich Nhat Hanh emphasizes the importance of having a Sangha, a spiritual community. Regardless of his or her own position, a president is drawn to the policies that reflect the energies in the nation’s collective consciousness. The nation’s policies will reflect understanding and compassion only when the president’s advisors, his party, and a majority of the country are able to transform their own fear and anger.

If you are surrounded by friends, co workers, who have the same vision, then you will succeed. You have got to have a sangha behind you. Otherwise you will give up after some time. If you want to do something, build a Sangha.

You are invited to join us this Thursday for the meditation, the video segment, and the Dharma discussion. An excerpt from Thich Nhat Hanh’s response to the first question is below.

I want to end with two announcements about our Still Water MPC sangha. The photo above shows the Still Water meditation group that meets each Friday afternoon at 3:45 at the Friends House Retirement Community in Sandy Spring, Maryland. As far as we know, it is the only mindfulness group that meets in and is attended primarily by residents of a retirement home. They have been meeting each Friday for the past five years. You are invited to sit with them. It is a very special group.

Still Water has also for the past five years had a special relationship with the Shepherd’s Table, a non-profit center that offers meals, shelter, clothes, and other resources to individuals without homes or otherwise in need. Currently Still Water volunteers help with the Clothes Closet on the third Wednesday morning of each month (10 to noon) and with the brunch service on the fourth Sunday of each month ( 9 to noon). A few more volunteers are needed. If you are able help out on an occasional or regular basis, or if you have questions, please email Still Water at info@StillWaterMPC.org. It is a wonderful way to practice mindfulness and compassion.

Question and Answer from the Art of Suffering Retreat, August 2013

Practitioner: If you were the presidents’s spiritual advisor, and had a moment with him, what you would tell him?

You believe that a person like the president of the United States has a lot of power and can do everything he wants to do. No. That is not true. Nobody feels they don’t have enough power like a president of a big country. They feel powerless. . . .

You have got to have a sangha. A sangha that has a lot of understanding, compassion, and brotherhood. If you have such a sangha, then a war would not be possible. Because advisors, collaborators, friends and supporters think the same way, see things in the same way, in the light of understanding and compassion. There must be other ways than the way of using the gun.

I think president Obama tries to do his best. Sometimes he uses loving speech very well, very well. We need loving speech, we need deep listening. But we also need the collective energy of a sangha to support us in order to do it. Otherwise you are under pressure to do the thing that the collective consciousness wants you to do. If the country still has a lot of fear and anger, then you have to operate on that collective energy of fear and anger. To transform the way of thinking in a country. You begin first with your group. You change your thinking. You are capable of being together in harmony. You have to share the same kind of vision, understanding and compassion. Then you are capable of changing the thinking, the way of looking, of your people. And now you have enough not to do it, not to do it.