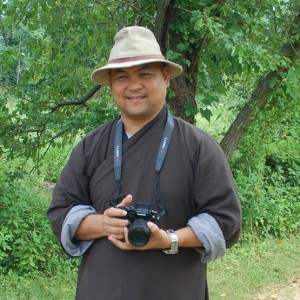 This Thursday evening (and Sunday evening in Columbia), we will have our Dharma sharing with Br. Michael Nguyen (Chan Phap Uyen) on the theme of Learning to Let Go.

In preparation for our evening, I asked Br. Michael what letting go means to him:

First of all, not to get stuck in our stories. Thay teaches about the first and the second arrow. The first is external conditions: what happens to us, what others do. The second arrow concerns how we attach to the story or the narrative we have in our mind. The more times we tell the narrative, the more it seems that is the full and only explanation.

Letting go means seeing that our stories about what others have done might be one part of it. But we contributed, too. We all have seeds such as anger, fear, and self-cherishing in us. We are always to some degree co-responsible for what happened and how we responded.

A second part of letting go is the practice of forgiveness. When we are stuck, we can’t forgive ourselves or the other person. Not letting go gives us a purpose, such as to be continually angry at ourselves or another person. But anger is like a molten rock. If we don’t let it go, it will always be burning us. We have to develop compassion, a deep understanding of how our actions and the actions of others arise from many causes and conditions.

And a third part of letting go is being able to let go of our egos, letting go of what our egos want. When I was working to set up the Veterans retreat at Blue Cliff Monastery, I had to trust that it would happen when it was going to happen, not when I wanted it to happen. It took four years for it to manifest.

When we work on a project, we have to let it come from our hearts. Everything can’t be just about me. If our ego is not so involved, we can accomplish much more.

You are also invited to join us this Thursday or Sunday for a brief orientation to mindfulness practice and the Still Water community. The orientation will begin at 6:30 pm on Thursday and 6:00 on Sunday, and participants are encouraged to stay for the evening program. If you would like to attend the orientation, it is helpful if you let us know by emailing us at info@StillWaterMPC.org.

Br. Michael will be offering a Mindfulness and Trauma Relief Workshop on December 5th and 6th at the Yoga Center of Columbia. Space is very limited — and a few places are still open. Please register soon.

Our fledging Spanish-speaking Still Water group meets at the Silver Spring Library on the first and third Wednesday of each month. For more information please contact Carlos at sanghaflordeloto@gmail.com.

More information about Br. Michael is below, along with several excepts about letting go in the Buddhist tradition.

Brother Phap Uyen’s path to monastic life is unusual. Born in Vietnam, his family came to the US as immigrants when he was two years old. Thirteen years later, in 1989, he met Thich Nhat Hanh at a retreat and took the five mindfulness trainings. However, two years later, rather than moving in the direction of spiritual practice, he took his life in a different direction and joined the Navy. He served in Iraq during Desert Shield/Desert Storm, from 1991-1995.

Eventually, he found his way back to a spiritual path, attending a retreat at Plum Village in France in 2002 and staying on to ordain as a monastic. Phap Uyen received full ordination in 2007, and has been a Dharma teacher since 2010. In recent years, with the encouragement of Thich Nhat Hanh, he has focused his teaching on working with veterans and their families.

The idea of “letting go,” of relinquishing unhelpful ideas, emotions, habits, and things, has been a central theme of mindfulness practice through the millennia. The Buddha included Upekkha as one of the Four Sublime States (brahmaviharas), and one of the Seven Factors of Enlightenment. The Mahayana school included Upeksha, the Sanskrit equivalent, as one of the 11 wholesome mental formations in its list of 51 mental formations. What is upekkha? Bhikku Bodhi explains:

As a spiritual virtue, upekkha means equanimity in the face of the fluctuations of worldly fortune. It is evenness of mind, unshakeable freedom of mind, a state of inner equipoise that cannot be upset by gain and loss, honor and dishonor, praise and blame, pleasure and pain. Upekkha is freedom from all points of self-reference; it is indifference only to the demands of the ego-self with its craving for pleasure and position, not to the well-being of one’s fellow human beings. (From the essay: “Toward a Threshold of Understanding”.)

In The Heart of the Buddha’s Teaching Thich Nhat Hanh clarifies the meaning of upeksha in the context of the Four Elements of True Love, his term for the Four Brahmaviharas:

[Upeksha means] equanimity, nonattachment, nondiscrimi­nation, even-mindedness, or letting go. Upe means “over,” and ksh means “to look.” You climb the mountain to be able to look over the whole situation, not bound by one side or the other. . . . People who do not understand Buddhism sometimes think upeksha means indifference, but true equanimity is neither cold nor indiffer­ent. If you have more than one child, they are all your children. Upeksha does not mean that you don’t love. You love in a way that all your children receive your love, without discrimination.