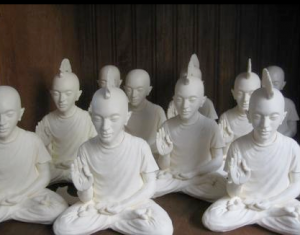 This past week I attended a three-day Council of Western Buddhist Teachers at the Garrison Institute, in New York state. I was touched and inspired by some remarkable people, including a nun from the Tibetan tradition who created a transition housing and education program for run-away / homeless youth in North Carolina (MyPlacewnc.org), and several dynamic (and heavily tattooed) young Dharma teachers from the Against the Stream Buddhist Meditation Society in Los Angeles. (The above photo is from their web site.)

I was also at times dismayed by the impatience and contentiousness of some well-known teachers. They quibbled over small points, promoted their own projects or accomplishments, or turned opportunities for exchange into debates. They seemed unable to respectfully listen to each other. This Thursday evening after our meditation period we will reflect on what it means to really listen to another and why it might be important for our practice and our lives.

We will begin our program with “Why Bother Listening to Opinions you Disagree With?” a segment of a talk by the philosopher Jacob Needleman. When there is disagreement, Needleman suggests, it is helpful, before responding, to sum up the other persons position in such a way that he or she is able to say, “that it an accurate statement of my view”:

Then we will practice this way of listening, sharing with one other person a bit of ourselves: a suffering, a joy, or a longing. Our partner will mirror back to us in his or her own words what we have said, until we feel we have been completely understood.

We will conclude with a group reflection on listening: What does deeper listening offer to our lives and our world? (In the short essay below, Needleman relates the response he got when he explained this way of listening to several members of Congress.)

Thoughts on Tucson: the Crisis of Civility by Jacob Needleman

The White Dove: Civility in Public and Private Life

Not long ago I was a guest at one of President George W. Bush’s  State of the Union addresses. After the speech, at a private home a stone’s throw from the Supreme Court building, I met with some members of Congress to talk about how a philosopher sees the heart-wrenching crisis of incivility in American public life.

I had just finished describing how in my philosophy classes I make use of what counselors and mediators sometimes call the practice of “mirroring.” In that exercise two people holding passionately opposed opinions about an important issue debate each other under the following strict condition: they can express their views only after they have faithfully summarized what the other has just said. I treat this exercise not so much as an instrument of reconciliation, but mainly as a means of studying and understanding what it really means to listen to another human being. The result is often nothing short of miraculous, even to the point of bringing tears to my eyes.

This exercise holds lessons that are desperately needed in our public and private life. In absolutely every case, the two participants come away with the profound realization that they have been disagreeing with an opinion held by a real living human being. They have been denying each other’s views, not each other’s humanity. Even to the point of walking away arm in arm—and even though their views have not been changed!

And furthermore, even though their views have not changed, they have been compelled for a brief moment to take a distance from their passionately held opinions in order to be able to summarize what the other has said. And this has enabled them to think more clearly and deeply about their own views. And so, this exercise is also an exercise in the work of thinking, thinking together with another human being.

The life of our democracy depends entirely upon the lessons of this exercise. One could even say that the life of our world depends upon learning to do the work of listening. To listen to another requires far more than simply waiting for a moment to put forth one’s own views or attack the other. It means allowing the other person into one’s mind, receiving their thought. It does not mean agreeing with the other—that is not the essential element. The essential element is making room in one’s mind for another’s views– and that requires the effort of separating for a moment from one’s own thoughts. The result is a new relationship between two human beings, something far, far more important than winning or losing an argument. One discovers that one can respect, or perhaps even love, another person who holds views that are diametrically opposed to one’s own!

When I explained this exercise to the members of Congress, I said to them (knowing full well what their response would be): “I imagine that when you are trying to decide issues that will affect the lives of millions of Americans you try to listen and think together like this.” They looked at me as if I were crazy.  “Never!” they said, sharply and sadly,  “Never do we work together like that!” They went on to tell me how much they would wish to work like that—and even sometimes, privately did—but that the system—media, television, lobbyists—had now made it impossible in their public role as members of Congress.

In certain medieval Christian illustrated manuscripts, two individuals are seated facing each other and speaking. Above them hovers a white dove. The dove is the classic symbol of the Holy Spirit and in these illustrations the spirit—that is, the energy of a higher reconciling force–is descending into the hearts and minds of individual human beings speaking and listening to each other.

All men and women, of whatever faith or belief, need that white dove to descend into our common life—no matter by what name we call it: truth, love, impartiality—or, finally, peace. And it can begin to enter our lives by the simple act and fully human work of listening to each other. It is actually possible.