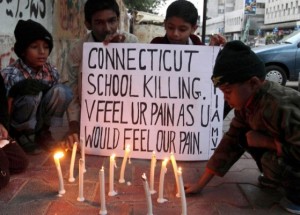 This past Thursday we talked about the Five Mindfulness Trainings being of assistance in aligning our aspirations and our actions. The next day, in Newtown, Connecticut, a young man used semi-automatic weaponss to kill his mother in their home, twenty children and six adults at the Sandy Hook Elementary School, and himself. Since I first heard about the tragedy, I have been asking: How shall I respond? In this situation, what are the actions that come from my aspirations?

This Thursday evening, after our meditation period, we will explore together how we have been touched by the shootings in Connecticut — the pains, fears, hopes, and longings it stirred up — and how we might respond wisely, individually and collectively.

As I’ve sat with this, I find myself wanting to do something right now that will move the U.S. toward saner gun laws and less glorification of violence in our culture. The first concrete steps that came to me, which I will do this week, is to make a donation to the The Brady Campaign to Prevent Gun Violence and to write letters to my congressman and senators encouraging them to reinstate the ban on assault guns and take other measures to reduce the availability of military grade weapons in private hands.

The other direction my heart goes is wanting to address the fear, anger, and disconnection that I believe underlie violent acts. We will never know what was in the young man’s mind. However, my sense of the Newtown tragedy is that the young man was overwhelmed by pain and anger and the only way he could think of resolving it was to take revenge on the world and end his own life. Apparently he didn’t know, or didn’t have access to, other ways of working with difficult emotions, such as embracing the emotions with love, talking with a friend, or seeking professional help.

Years ago, half way through a mindfulness workshop at a Maryland prison, a tall, burly inmate, sitting toward the back of the group, raised his hand and asked a question: “This mindfulness you are teaching us, it is really just about working with our emotions, right?”

I did not have clarity about the intention behind the question. Was he about to be dismissive of what I was saying? I took in a breath, let in what he was asking, and decided to agree with him: “Yeah, basically that’s right.” Immediately his countenance softened. He replied back in a gentler voice: “I wish someone would have taught me this stuff when I was 17.” After the workshop he told me that when he was 17 he got in an argument and killed someone. He had been in jail for 20 years, and was looking forward to being released in the next year.

I feel blessed to have a spiritual practice, to be part of a spiritual community, that helps me work with my difficult emotions and with the difficult emotions of others. We are encouraged by our spiritual ancestors to calm our minds and to look deeply into the ongoing flow of feelings, emotions, and thoughts. Over time, our understanding, love, patience, and inclusivity grow. We begin to see, as Thich Nhat Hanh wrote in the second Mindfulness Training, “that the happiness and suffering of others are not separate from my own happiness and suffering.”

The tragedy of Sandy Hook draws me to do more — to be more open each day to my suffering and to the suffering of others. I find the above picture of Pakistani youth both tenderly beautiful and a great challenge. It is so easy, so seemingly automatic, to subtly separate myself from others, whether it is from someone I am having a disagreement with or from someone very different or very distant from me. The underlying encouragement I see the Pakistani boys offering me is: “We don’t have to do it that way any more.”

You are invited to join with us this Thursday for our meditation and Dharma sharing.

We also hope you can join us at the upcoming Still Water special events: