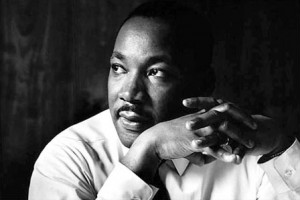 I believe one of the most sincere ways to honor the memory of Martin Luther King, Jr. is to pay careful attention to what he was saying, especially to what he was asking of himself and others.

This Thursday evening, after our meditation period, we will listen to a recording of “The Drum Major Instinct,” a sermon King gave on February 4, 1968, at the Ebenezer Baptist Church in Atlanta, Georgia. He began the sermon with the story from Saint Mark in which James and John, the sons of Zebedee, ask Jesus whether they might they sit on his right side and his left side when he is recognized as King of the Jews.

Closely following a published sermon by J. Wallace Hamilton, a liberal white Methodist preacher, King characterized James and John’s urge to be recognized, to lead the parade, as the “The Drum Major Instinct.” King reminded his audience that this instinct, if not managed, can become pernicious. It influences our lifestyle and fuels our boasting and self-centeredness, and our tendency to stereotype and put others down. It can undermine harmonious race relations and international relations. However, rather than encouraging the elimination of “The Drum Major Instinct,” King notes that Jesus asks James and John to redirect it.

"Now brethren, I can’t give you greatness. And really, I can’t make you first." This is what Jesus said to James and John. "You must earn it. True greatness comes not by favoritism, but by fitness. And the right hand and the left are not mine to give, they belong to those who are prepared." (Amen)

That was, according to King, the path he chose for himself. Looking forward to the eulogy that might be said at his funeral, he recommended:

Although it is framed and presented in a Christian context, the sermon powerfully address the same issues that appear in Dharma talks: how do we move beyond our tendencies towards pride and self-cherishing to embrace a more encompassing, liberating vision of our lives? How do we become Bodhisattva Warriors, channeling our talents and skills for the benefit of all?

You are invited to be with us this Thursday evening for our sitting, our listening, and our sharing together.

Stanford University offers on line the full text and audio of "The Drum Major Instinct," An excerpt from Pema Chodron on becoming a Bodhisattva Warrior is below.

. You Are Invited to Join Us

Register now or mark your calendar

A Calm Mind and a Joyful Heart: Introduction to Mindfulness Practice, February 6, at Crossings in Silver Spring, Maryland.

Smiling like a Buddha: A Ten-Session Mindfulness Meditation Class, February 13 – May 7, at Crossings in Silver Spring, Maryland.

By Pema Chodron, from Comfortable with Uncertainty

Those who train wholeheartedly in awakening bodhichitta are called bodhisattvas or warriors— not warriors who kill but warriors of nonaggression who hear the cries of the world. Warrior-bodhisattvas enter challenging situations in order to alleviate suffering. They are willing to cut through personal reactivity and self-deception. They are dedicated to uncovering the basic, undistorted energy of bodhichitta. A warrior accepts that we can never know what will happen to us next. We can try to control the uncontrollable by looking for security and predictability; always hoping to be comfortable and safe. But the truth is that we can never avoid uncertainty. This not-knowing is part of the adventure. It’s also what makes us afraid.

Wherever we are, we can train as a warrior. Our tools are sitting meditation, tonglen, slogan practice, and cultivating the four limitless qualities of loving- kindness, compassion, joy, and equanimity. With the help of these practices, we will find the tenderness of bodhichitta in sorrow and in gratitude, behind the hardness of rage and in the shakiness of fear. In loneliness as well as in kindness, we can uncover the soft spot of basic goodness. But bodhichitta training offers no promise of happy endings. Rather, this "I" who wants to find security—who wants something to hold on to—will finally learn to grow up. If we find ourselves in doubt that we’re up to being a warrior-in-training, we can contemplate this question; "Do I prefer to grow up and relate to life directly; or do I choose to live and die in fear?"