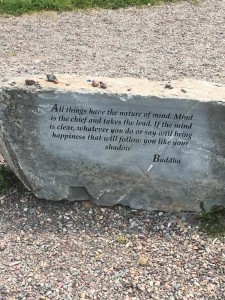 One of the greatest challenges I have had with my practice is to see and realize that the thoughts and the thinker are not separate things. I have a very powerful sense that “I” is separate from you, from all the bad in the world, from Republicans, from the things that I consume. In this state of delusion, it appears that I am separate from what I consume, and therefore, I am not impacted by it. In Buddhist philosophy, this is referred to as “double grasping”.

In Transformation at the Base, Thich Nhat Hanh describes the term “double grasping” for the view that subjects and objects have an existence separate from consciousness.

Consciousness always includes subject and object of consciousness. Self and other, inside and outside are all creations of our conceptual minds. This has been transmitted to us by many generations, and is called the two-fold, or “double grasping.” First is the grasping of the subject of perception as self, and second is the grasping of the object of perception as an external, objective reality. In fact, both subject and object belong to perception. We have to train our minds in order to be able to release both kinds of grasping.

Thay uses a beautiful example for understanding a formation, that helped me to gain more insight into this teaching.

When we look at a flower, we can recognize many of the elements that have come together to make the flower manifest in that form. We know that without the rain there can be no water and the flower cannot manifest. And we see that the sunshine is also there. The earth, the compost, the gardener, time, space, and many elements came together to help this flower manifest. The flower doesn’t have a separate existence; it’s a formation. The sun, the moon, the mountain, and the river are all formations. –The Four Layers of Consciousness by Thich Nhat Hanh

It is easy for me to see that a flower cannot be separate from any element that makes it. You cannot simply pull out a flower and say “this is a flower, and it is only one thing”. However, when it comes my default view of myself, it is automatically me and everything else. Double grasping. As I contemplated this in preparing for this topic, it occurred to me that this separateness provides many unwholesome seeds, such as judgement, comparison, superiority, and indifference.

So how do we become more mindful of our consumption of the nutriment of consciousness?

Mindfulness keeps us in the present moment and allows our mind consciousness to relax and let go of the energy of worrying about the past or predicting the future. As we become more skilled at recognizing our tendencies and our thought patterns, we can respond in more wholesome ways. This will allow our body budgets to be more optimally balanced.

When working with manas, Thay offers the following insights into releasing the notion of “I am”.

When we meditate, we practice looking deeply in order to bring light and clarity into our way of seeing things. When the vision of no-self is obtained, our delusion is removed. This is what we call transformation. In the Buddhist tradition, transformation is possible with deep understanding. The moment the vision of no-self is there, manas, the elusive notion of ‘I am,’ disintegrates, and we find ourselves enjoying, in this very moment, freedom and happiness. –The Four Layers of Consciousness by Thich Nhat Hanh

This Thursday night, after our regular sitting at Crossings, we will recite the Five Mindfulness Trainings. We’ll pay special attention to the Fifth Training in our sharing, exploring our experiences of cultivating good heath through mindful consumption. The questions we would like to start the Dharma discussion with are:

You are warmly invited to be with us!

Aware of the suffering caused by unmindful consumption, I am committed to cultivating good health, both physical and mental, for myself, my family, and my society by practicing mindful eating, drinking, and consuming.

I will practice looking deeply into how I consume the Four Kinds of Nutriments, namely edible foods, sense impressions, volition, and consciousness.

I am determined not to gamble, or to use alcohol, drugs, or any other products which contain toxins, such as certain websites, electronic games, TV programs, films, magazines, books, and conversations.

I will practice coming back to the present moment to be in touch with the refreshing, healing and nourishing elements in me and around me, not letting regrets and sorrow drag me back into the past nor letting anxieties, fear, or craving pull me out of the present moment.

I am determined not to try to cover up loneliness, anxiety, or other suffering by losing myself in consumption.