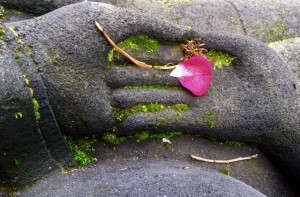 Recently, I’ve been reflecting on what it means to heal physically, mentally, and spiritually. This interest arose, in good part, because the retreat this weekend is titled “Learning to Quiet, Learning to Heal,” and in two weeks, the retreat I will be leading in Israel is titled “Be Still and Heal.”

In the 1990s Thich Nhat Hanh talked often about the healing powers of mindfulness. Sometimes he would say that the energy of mindfulness enters and changes every cell in our bodies. I thought it was a powerful metaphor, but not really true in the sense of being scientifically provable. I was wrong. Over the past ten years many bio-medical scientists have studied and found links between mindfulness practice and cellular health. They have found, for example, that regular meditation is correlated with with longer telomeres (the protective caps on chromosomes), and that longer telomeres are associated with living longer and having fewer cancers. Other researchers have found that  the immune cells of mindfulness practitioners show higher rates of the antiviral response and lower rates of the inflammatory response.

I’ve also learned recently that the English word “heal,” when first used during the medieval period, had the meaning “cure; save; make whole, sound and well.”

So healing in its oldest sense is about wholeness, fitness, and resilience. In the modern world, our ways of living and thinking create many divisions and antagonisms within our bodies, minds, and spirits, and between them. Sometimes an illness helps us understand how antagonistic we have been to our bodies. We have eaten things or done things that have undermined our health. Sometimes our words indicate inner conflicts, such as when we say “I am angry at myself for saying that.” or “I was at the computer last night much later than I wanted to be.”

Mindfulness practice helps us to heal. We become more experientially aware of our bodies, our habitual patterns and reactions, our mental processes, and our deepest aspirations. When we are aware we are better able to recognize and transform our inner and outer conflicts, and we are better able to live our lives in a way that supports healing and reconciliation. (Mindfulness of our body may lead us to modern medications and treatments that restore our fitness and resilience.) In the tradition of mindfulness practice, the pivotal step in fully coming to wholeness is the realization that we are inseparable from the flow of life in the cosmos, just as the wave is inseparable from the ocean.

For Thich Nhat Hanh, the path to healing and wholeness is through resting and learning to relax, letting go of tensions and chronic stress. In a Dharma Talk on July 30, 1997, he explained:

Our body has the capacity of healing itself. You know that. When you get a cut in your finger, do you have to do anything? No. You only have to keep it clean and in a few days it will be healed. …  When an animal is wounded in the woods, it knows how to do this. It seeks a peaceful corner in the forest and it lays down for several days. … They don’t have doctors, they don’t have pharmacists, but they know how to rest. They don’t need to run after their prey, they don’t need to eat—in fact, they fast during these three, four, five days of resting. And one day the animal is healed and it stands up and it goes to look for a source of food. We don’t know how to do like animals. … we don’t know how to allow our body to rest. So learning how to allow your body to rest is a very important practice.

And for your spirit, it is the same. Our consciousness is able to heal itself. It has the power of self healing but you don’t allow it to rest. You continue to feed your consciousness with your anger, your worries, your thinking, and so on. … If you know how to practice total relaxation, you’ll know how to smile and how to send your smile to different parts of your body. During that time, you have stopped thinking and worrying because you are focused on your body, your breathing, your walking. … Stopping the thinking, stopping the worries, is very important. …

We have to trust our spirit in the way we trust our body. Our spirit has the power of self healing if only we allow it to rest and don’t continue to feed it with more worries, with more projects, with more fear. The practice of mindful breathing, mindful walking, enjoying the contemplation of the sky, of the vegetation, of being with friends, enjoying things in the present moment, helps you to stop filling the heart and the spirit with worries and fear. You will heal in the inside.

This Thursday, after our meditation, we will talk about what helps us to heal and become more whole, and what makes it more difficult.

Below are excerpts about mindfulness, healing, and wholeness from Henry David Thoreau and Albert Einstein.

The mass of men lead lives of quiet desperation. What is called resignation is confirmed desperation. From the desperate city you go into the desperate country, and have to console yourself with the bravery of minks and muskrats. A stereotyped but unconscious despair is concealed even under what are called the games and amusements of mankind. There is no play in them, for this comes after work. But it is a characteristic of wisdom not to do desperate things.

An Optical Delusion Of Consciousness
by Albert Einstein, quoted in The New York Times , March 29, 1972

A human being is part of the whole, called by us “Universe,” a part limited in time and space. He experiences himself, his thoughts and feelings, as something separated from the rest, a kind of optical delusion of his consciousness. This delusion is a kind of prison for us, restricting us to our personal desires and to affection for a few persons nearest to us. Our task must be to free ourselves from this prison by widening our circle of compassion to embrace all living creatures and the whole of nature in its beauty.