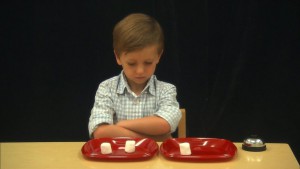 As I was thinking about my intentions for 2015, I happened upon a short PBS interview segment with the psychologist Walter Mischel. More than fifty years ago Mischel set out to understand self-control by giving young children a choice between one marshmallow (or other desired treat) right now, or, if they could wait without eating the marshmallow, two marshmallows in a little while. Recently Mischel wrote his first popular book — The Marshmallow Test —describing the history of self-control studies and his own struggles with temptation.

In the PBS interview, Mischel noted that it is not enough simply to make a resolution to change one’s ways. One needs a well-rehearsed plan of action when faced with a temptation. He talked about his own intention of reducing his intake of chocolate desserts. At a restaurant, once he is directly looking at a chocolate mousse, he is likely to cave in. His plan is to order a fruit salad before the waiter brings the tray of desserts to him. His back-up plan is to imagine the chocolate mousse sitting in the restaurant kitchen with a cockroach walking on it.

In The Marshmallow Test Mischel describes our struggles with temptation in terms of the interaction of two systems in our brains: "one ‘hot’—emotional, reflexive, unconscious—and the other ‘cool’—cognitive, reflective, slower, and effortful.” Self-control involves learning ways to cool off our hot responses — deferring gratification — so that we can attain a greater reward in the future. For the small child the greater reward might be a second cookie. For an adult the greater reward might be a healthy body, a committed relationship, or a peaceful heart.

Mischel pointed out in the interview that having the cognitive skills of self-control is not enough, there has to be a strong motivation, a clear sense of what we want: he calls it “a burning goal." In his own case, for many years he had the intention of quitting smoking, but didn’t do it. Only when he saw a patient on a gurney going in for radiation therapy for lung cancer did he develop a really strong motivation to quit. Many people can be very self-controlled in areas where they have strong motivation, but lack it in other areas. Mischel notes that Bill Clinton had great self-control in getting a Rhodes scholarship and a Yale Law degree. However, when coping with the stress of the White House, he lacked self-control around junk food and certain women.

As I reflect on the work of Walter Mischel from the perspective of mindfulness practice, I see a great alignment. Both Mischel and the the Buddha teach that we create suffering for ourselves and others when we are not skillful with how we work with our cravings, addictions, and unwholesome desires. And Both Mischel and the Buddha believe it is possible to teach both children and adults how to create less suffering, which is another way of saying more joy and contentment. In a recent interview with Diane Rhem, Mischel singled out mindfulness meditation as a practice that has helped many adults increase their competency in self-control.

One important aspect of mindfulness practice is learning to cool our hot urges and emotions. Sitting and walking meditation assist us in creating a gap between a stimulus and our actions. It might be between our noses itching and the scratching of our noses. It might be between being annoyed by someone and saying harsh words. In that gap, we have a chance to “coolly” reflect on our “hot” reactive urges.

In Anger: Wisdom for Cooling the Flames, Thich Nhat Hanh teaches us to cool our anger and other “hot” responses by embracing them:

We know that when anger is present in us we should refrain from reacting, namely from speaking, or doing anything. To say something, to do something while you are angry is not wise. We are urged to go back to ourselves in order to take good care of our anger.

Mindfulness means to be present, to be aware of what is going on. This energy is very crucial for the practice. The energy of mindfulness is like a big brother, big sister, or a mother, holding the younger one in her arms, taking good care of the suffering baby, which is our anger, despair, or jealousy.

This Thursday evening, in our Dharma sharing, we will explore our experiences with mindfulness and self-control. Have we had good, bad, or mixed experiences with resolutions, intentions, goals, and plans? How might we choose to nourish and embody our spiritual aspirations in 2015?

You are also invited to join us this Thursday for a brief orientation to mindfulness practice and the Still Water community. The orientation will begin at 6:30 pm and participants are encouraged to stay for the evening program. If you would like to attend the orientation, it is helpful if you let us know by emailing us at info@StillWaterMPC.org.