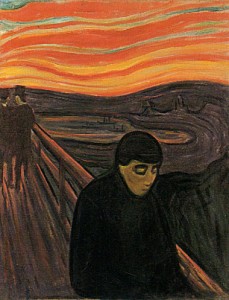 Years ago, when I first learned to meditate, the basic instruction I received was to bring my attention to my breath, and to my other physical sensations. When my attention wandered, I was taught to note that it had strayed and to bring it back to my breath. This was a very centering and powerful practice. I enjoyed the sense of ease it brought me, especially in comparison to the worrying and day-dreaming I was accustomed to.

Over the next several years, wanting to learn more about meditation and mindfulness, I attended a number of five- to fifteen-day silent retreats. With each retreat my comfort with sitting increased. My retreat days were calm and concentrated. However, during the nights I experienced unusually powerful nightmares in which I was often the victim, or perpetrator, of odious deeds. I didn’t comprehend this disturbing pattern.

Eventually an experienced Zen teacher helped me understand that with my exclusive attention on physical experience I was ignoring my difficult and unruly emotions, effectively suppressing them during the day. At night my guard was down and the pent-up energies burgeoned out and shaped my dreams. The teacher suggested that I expand my meditative awareness to my emotions. I learned to breathe in and become aware of my emotional state and then breathe out and let everything go. I could do this periodically throughout the day, or whenever I was aware of a strong emotion. It helped, and the linkage between retreats and nightmares weakened.

In the book, What Really Helps: Using Mindfulness and Compassionate Presence to Help, Support, and Encourage Others, Karen Kissel Wegala recommends a practice very similar to the breathing in and letting go I learned from the Zen teacher. She calls it Touch and Go:

when a feeling or thought or sensation arises, we touch it—feel it completely. We can touch quite completely in a moment. It is like tasting an anchovy. We can taste the salty, pungent flavor in just a moment. We can do the same with whatever arises during our practice. Instead of skittering away, we touch. We move toward what is happening instead of trying to get away. Rather than rejecting our experience we show an interest in it.

Then, having touched, we let it go. We touch and then we go out with our outbreath. Going is a kind of relaxation; we loosen our grip on ourselves. We might find that there can be an unforced rhythm of touching and going, not unlike the in and out of our breath.

Thich Nhat Hanh’s approach to working with difficult and unruly emotions is complementary to “touch and go.” He recommends that we embrace our problematic emotions with mindfulness:

We want to forget our suffering, we don’t want to look face to face with our suffering. The Buddha advised us to be brave enough to hold the suffering and to look into it. The practice recommended by the Buddha is that when a feeling of anxiety, of fearfulness, comes up . . . invite the energy of mindfulness to manifest. Practice mindful breathing, mindful walking, and invite the energy of mindfulness to take care of the energy that makes you suffer, such as fear, anger, anxiety, sorrow, or despair. . . . The practice is not mindfulness fighting fear and anger, but mindfulness recognizing and embracing fear and anger. (From a Dharma talk at Stonehill College, August 14, 2007)

This Thursday evening, after our meditation, we will share our experiences using mindfulness to work with difficult and unruly emotions such as fear, anger, greed, jealousy, and despair. What have we learned? What are we still learning?

In the excerpt below, Thich Nhat Hanh descibes the practice of "mere recognition" as a way of embracing emotions such as anger and sadness.

by Thich Nhat Hanh from Transformation at the Base

When we are rooted in mindfulness, we can see clearly what is unfolding within us. We don’t grasp it and we don’t push it away—we simply recognize it. When we are angry, mindfulness recognizes the anger. When we are jealous, mindfulness recognizes the jealousy. When we acknowledge the presence of fear or sadness in us, we don’t judge it and say that it is bad. We simply observe every occurrence in our body and mind with our mindfulness, and greet whatever arises without praise, reprimand, or judgment. This is called “mere recognition.” Mere recognition does not take sides. The object of recognition is not our enemy. It is none other than ourselves. We acknowledge it as we would acknowledge our own child.