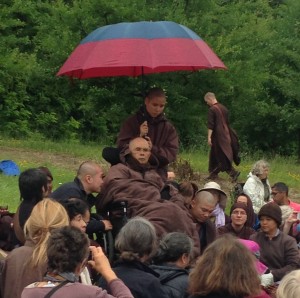 I returned last week from the twenty-one-day retreat at Plum Village in France. Over the past two decades the twenty-one-day retreats were a biannual event during which Thich Nhat Hanh (Thay) addressed significant topics, such as “What happens when we die?” (2014) and “The Science of the Buddha” (2012). This year was the first twenty-one-day retreat in which Thay did not give the major dharma talks. Because of the continuing limitations caused by the stroke he endured in November, 2014, in this retreat Thich Nhat Hanh made only occasional appearances to give his silent support and energy to the 800 practitioners. Monastic and lay dharma teachers gave the dharma talks, often explaining key practices through sharing how their lives had been touched or transformed. (I gave a Dharma talk on June 5th on the Four Foundations of Mindfulness.)

Rather than venturing into new areas, as Thay often did, it was a deepening of familiar teachings. For me and for many of the people I talked with it was a very intimate retreat. I had a deep experience of what Thich Nhat Hanh calls “Going as a river.”

One phrase that kept reappearing for me during the retreat was “not behave as a victim.” It came up when  I was asked to join a panel on the Fourteen Mindfulness Trainings of the Order of Interbeing.  We randomly picked trainings and I pulled the Eighth Training on True Community & Communication. The last sentence reads: “We will not behave as a victim but be active in finding ways to reconcile and resolve all conflicts however small.”

The phrase appeared again as a theme in Sr. Jina’s Dharma talk. She mentioned that several years ago when they were rewriting the 14 mindfulness trainings Thay was asked whether the phrase “not behave as a victim” could be taken out. He replied, “No. It needs to be there.”

Another time it arose indirectly. At the beginning of a Dharma talk, Br. Phap Ung lead the monastics in chanting Namo Valokitesvaraya, an homage to the Bodhisattva of Great Compassion. He suggested that we give our sorrow to the Buddha and the Bodhisattvas. I thought how freeing it would be to let it all go, to fully release all my sorrow, resentment, and fear. For me, it was related to “not behaving as a victim.”

For several weeks at Plum Village, two questions kept arising in my mind, like a koan: What does is mean to behave as a victim? What does is mean to not behave as a victim? They seem like such essential questions for our individual happiness and for understanding interpersonal and societal conflicts. Bit by bit, conversation by conversation, my understanding grew.

I looked up the word “victim.” It comes from victima, the Latin word for the sacrificial animal used in Roman cult worship. It is an evocative image: a blameless creature who is killed by others.

In modern use, a “victim” is someone who is harmed, injured, or killed, in a crime, an accident, or in some other way. Victims are acted upon by others. Their suffering are seen as not due to actions they have taken. There are many individuals who have been victimized in horrible ways: by childhood abuse and neglect, violence, starvation, physical or mental challenges, accidents, betrayal, and in many other ways. And throughout history there have been communities of people that have been victimized: such as by wars, slavery, class, caste, oppression, discrimination, racism, and sexism.

To some degree we are all victims, suffering from the inabilities of parents and families to always nourish and protect us; and receiving the fears, frustrations, prejudices, and limiting psychic adaptations of our ancestors. But to be a victim is different from behaving as a victim. It is similar to the Buddha’s story of the two arrows. The first arrow is the painful experience.  The second arrow is the suffering that comes from the mental anguish we add to the initial painful experience. Dick Bolles, in “The History Of Life Work Planning,” writes about the Victim Mentality. It is an orientation to life that says:

“My life is essentially at the mercy of powerful forces out there that are beyond my control. And therefore it makes little difference what I want out of life; I must learn to settle for whatever I can get, since I am essentially powerless to make my life be other than it is.” …

… there is a vast difference between being a victim, as we all are at times, and having the Victim Mentality. Being a victim means there are some areas of my life where I am battling powerful forces, but I will still do battle with them, and seek to prevail. Whereas, people in the grip of the Victim Mentality have essentially given up: what’s the use? Why even try? I am depressed. I have no hope. It is the difference between a soul that is a fighter, and a soul that has given up.

Thich Nhat Hanh, when he writes about behaving as a victim often focuses on the diminishment we experience when we are separated from who we truly are by mental states such as dispersion and distraction; by strong emotions, such as anger and sadness; and by our ideas of who we are or should be. In Nothing to Do, Nowhere to Go: Reflections on the Teachings of Zen Master Lin Chi, he writes.

The person who has nothing to do is sovereign unto herself. She doesn’t need to put on airs or leave a trace behind. The true person is an active participant, engaged in her environment while remaining unoppressed by it. Although all phenomena are going through the various appearances of birth, abiding, changing, and dying, the true person doesn’t become a victim of sadness, happiness, love or hate. She lives in awareness as an ordinary person, whether standing, walking, lying down, or sitting. She doesn’t act a part, even the part of a great Zen master. This is what Master Lin Chi means by “being sovereign wherever you are using that place as your seat of awakening.”

This Thursday evening, after our meditation, we will share our experiences and insights. When have we behaved as victims? How have we learned to not behave as victims? You are invited to join us.

Below is the full text of the Eighth Mindfulness Training and an excerpt on taking refuge in the present moment by Thich Nhat Hanh.

Aware that lack of communication always brings separation and suffering, we are committed to training ourselves in the practice of compassionate listening and loving speech. Knowing that true community is rooted in inclusiveness and in the concrete practice of the harmony of views, thinking and speech, we will practice to share our understanding and experiences with members in our community in order to arrive at a collective insight. We are determined to learn to listen deeply without judging or reacting and refrain from uttering words that can create discord or cause the community to break. Whenever difficulties arise, we will remain in our Sangha and practice looking deeply into ourselves and others to recognize all the causes and conditions, including our own habit energies, that have brought about the difficulties. We will take responsibility for the ways we may have contributed to the conflict and keep communication open. We will not behave as a victim but be active in finding ways to reconcile and resolve all conflicts however small.

Taking Refuge in The Present Moment

Thich Nhat Hanh, from “Taking Refuge in Your In-Breath: Commentary on the Teachings of Master Linji,” Mindfulness Bell, Summer 2004

You are always walking, going from your room to the restroom, to the office, to the kitchen. So why don’t you enjoy walking? Why don’t you go home to the present moment and enjoy taking refuge in your steps? Why do you allow yourself to be pulled in many directions? When you are distracted, you are not yourself, you are a victim. But you can change this by taking refuge in your steps right now, right here. It is wonderful to combine your in-breath with one, two, or three steps. In that moment you are truly yourself. You have your sovereignty; you are no longer a victim. You are no longer pulled away by the waves of birth and death. You are no longer drowning in the ocean of afflictions.

We will be having our Thursday evening gatherings on June 30th and July 7th at the temporary Crossings space above Whole Foods, in Suite 206, down the hall from our old space at Suite 202.

Beginning on July 14th, our Thursday evenings will be in the new Crossings suite at 8720 Georgia Avenue.