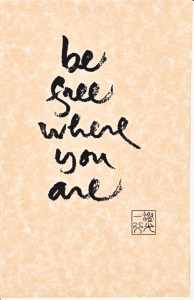 Last week, I was fortunate to be able to travel up to Blue Cliff Monastery in New York State for the opening retreat of the Plum Village US tour. The retreat was originally scheduled with Thich Nhat Hanh as the main Dharma teacher so the monastics had to readjust and step forward to lead the Dharma talks and other activities because of Thay’s physical absence. Though missing Thay’s voice and presence, I enjoyed hearing the different voices of monastics who gave dharma talks over the week. Learning their individual stories and their ways of sharing the teachings offered me new perspectives.

I think everyone who has attended retreats with Thay before in the Plum Village Tradition missed being with him. For longtime members of the community, the retreat held some bittersweet and challenging moments. In our small family Dharma sharing group as well as in others, people offered reflections on Thay’s health, his absence at this retreat, and how both affected them. Each half of our big circle, monastics and lay people, had the opportunity to witness how much Thay has meant to the other group.

This was my second time at Blue Cliff, and I was very aware of the contrast of the current retreat to the one I attended two years ago. There were less than half the number of people, which made it a lot easier for me to navigate the campus. But for the monastics, the smaller numbers mean less financial support from the community than they received in previous years.

Over the week, I heard from several people who, at times, strongly felt Thay’s presence among us. I also experienced a sense of Thay’s presence when I sat in the meditation hall on a cushion, surrounded by many other practitioners, especially during the opening morning chant, as the sky slowly lightened into daylight all around us.

Another time I felt Thay’s presence was sitting by a small pond in the heat of the day under a shady tree with a group of sangha members. A large number of people had hiked to the pond silently together in walking meditation, and now were scattered individually and in groups around the pond, on the dock, on a large rock, and on the grass under trees.

I had a sense of shared breathing, as if we were all breathing in and out at the same time, part of the murky brown water, the weeping willow, the ants trickling past us in the grass. I remembered a moment from the last retreat, of Thay carefully and slowly drinking his cup of tea on the dock by the same pond in the early morning, surrounded by his sangha.

Those two moments seemed to overlap into one, deeply felt, experience of joy in our connection. Perhaps on this retreat, along with our sadness at the inevitability of change, what we all collectively felt "in our bones" on a personal level is the truth of the ‘No Coming, No Going’ song.

"No Coming, no going,

No after, no before,

I hold you close to me.

I release you to be so free,

And you are in me,

The first night at Blue Cliff, I met a young woman who had just started meditating on her own, and had never been on a meditation retreat. We made friends, and I checked in with her on the last day of the retreat after she took the Five Mindfulness Trainings transmission. She said she’d had a wonderful experience overall, getting to look deeply at her emotions and be with herself again.

For her, this retreat without Thay leading Dharma talks, or sitting and walking meditations, will be the one she remembers. Yet, her whole experience is steeped in Thay’s teachings and the solidity of his presence. This young woman is now part of Thay’s continuation body, as we all are, however many times we have gone on retreats or whether we have just begun practicing or reading one of his books.

Thich Nhat Hanh wrote about this transformation of a continuation body into the collective consciousness in his article "The Next Buddha May be a Sangha" in Inquiring Mind Journal, in the Spring of 1994:

This Thursday evening at Crossings we will explore how we support each other in times of change, when the world we thought of as being solid around us unexpectedly shifts. How do we lean into our practice and our sangha, looking deeply at our expectations and perceptions to see clearly what is happening around us? You are warmly invited to be with us.

I Go Among Trees and Sit Still

By Wendell Berry from Sabbaths

I go among trees and sit still.

All my stirring becomes quiet

My tasks lie in their places

Then what is afraid of me comes

and lives a while in my sight.

What it fears in me leaves me,

and the fear of me leaves it.

Then what I am afraid of comes.

I live for a while in its sight.

What I fear in it leaves it,

and the fear of it leaves me.

After days of labor,

mute in my consternations,

I hear my song at last,

the day turns, the trees move.