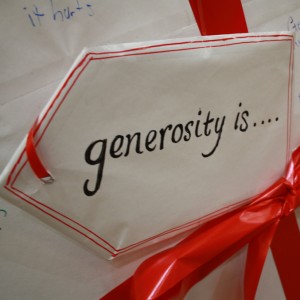 This Thursday evening, after our meditation period, we will recite together the Five Mindfulness Trainings. Our Dharma sharing will focus on the the Second Training, which begins:

The questions I would like us to reflect on and explore together include:

In the home I grew up in generosity was primarily about offering money to those who needed it. My parents quietly gave money to a number of relatives, on both sides of the family, who had fallen on hard times.

My father, especially, was considered a soft touch. Representatives of religious and charitable organizations knew that if they requested a donation, he would give generously. For my father, to give to those in need, especially if they had a familial or social connection, was to be a mensch, a Yiddish term meaning a person of integrity and honor.

In the mindfulness tradition Dana (Sanskrit for generosity) encompasses the giving of time and energy, as well as material resources. It emphasizes generosity as a character trait, a way of being. We can be generous with a smile, a small kindness, a willingness to be present to the concerns of others. In Pay Attention, For Goodness’ Sake, Sylvia Boorstein writes about a weekly meditation class in which the participants committed to five unscheduled acts of giving each day. Mainly they looked for and offered little things, like letting someone in a hurry go ahead of them at the grocery store. They found the exercise exciting and satisfying.

The mindfulness tradition teaches that when we are generous, innumerable benefits accrue back to us — according to the Buddha, many more than we can imagine:

… if people knew, as I know, the results of giving and sharing, they would not eat without having given, nor would they allow the stain of niggardliness to obsess them and take root in their minds. Even if it were their last morsel, their last mouthful, they would not eat without having shared it, if there were someone to share it with. (Itivuttaka 26: 18-19)

When Thay (the Venerable Thich Nhat Hanh) teaches about generosity, he often draws our attention to systemic inequalities. In Two Treasures: Buddhist Teachings on Awakening and True Happiness he writes:

Practicing generosity means continually acting in a way that will help equalize the difference between the wealthy and the impoverished. Whatever we do to ease human suffering and create social justice can be considered practicing generosity. … If we teach Buddhist philosophy though lectures, but do not practice generosity to ease the suffering of others, we have not yet attained the essence of Buddhism.

The full text of the Second Training is below, along with a story from the Buddha’s time about giving grudgingly and giving with an open heart.

Giving Generously
BY M. O’ C. Walshe, from the essay, “Giving from the Heart”

In the Payasi Sutta (No. 23 of the Digha Nikaya) we read of the debate between the skeptic Prince Payasi, who did not believe in an afterlife, and the Venerable Kumara Kassapa. After listening to a brilliant series of parables from the monk, Payasi declares himself converted, and decides to establish a charity “for ascetics and brahmins, wayfarers, beggars and the needy,” and he appoints the young brahmin Uttara to organize the distribution. Uttara complains that the food and clothing he is called upon to distribute are of such poor quality that Payasi would not touch them himself, and Payasi finally gives him leave to supply “food as I eat and clothes as I wear.” At the conclusion of the sutta, we are told of the rewards the two men received after death. Payasi, who had established the charity grudgingly, was indeed reborn in a heavenly world, but in the very lowest, that of the Four Great Kings, where he was lodged in the empty Serisaka mansion. Here, indeed, he was visited by the Venerable Gavampati, an Arahant who made a habit of taking his siesta in the lower heavens. And so the story was brought back to earth. But Uttara, who had reorganized the charity and given from the heart, was born in a higher heaven, among the Thirty-three Gods.