When I was growing up, I absorbed from my family and community a simple materialist world view. Scientists were respected: they explored reality with the scientific method and sensitive tools. Religion was not respected. Those who studied or practiced a religion were misguided, weak or foolish. Prayers were remnants of pre-scientific belief systems, examples of magical thinking.

As a teenager and in my twenties, I yearned for a spiritual life. I went to different types of services, yet I always felt on the outside. The rituals and prayers made no rational sense to me.

In mid-life, by luck, I had the unexpected opportunity to stay for a week at a retreat center and monastery in Thailand. I was struggling and suffering and looking for answers. Instead of answers, though, I received practices, suggestions for how to use my mind in different ways. Try this: be aware of your breath. Now try this: notice how long each experience lasts. Also this: be present to your feet when you walk. There was no creed to believe, no required rituals. Within days my mood changed; my problems felt more manageable. I felt more alive.

Two years later, in 1991, I went to Plum Village for the three-month winter retreat. In addition to the individual mindfulness practices I had learned from Vipassina teachers, there were communal practices at Plum Village. We read sutras together. We chanted together. One “prayer,” sung often was “Nam mo Bo Tat Quan The Am.” “I give homage to Avalokiteshvara, (the Bodhisattva of Compassion).” Sometimes the phrase would be sung over and over, for 10 or 15 minutes. To my surprise, I was both emotionally lifted and calmed by the chant.

Plum Village opened me to the possibility that there were many more forms of prayer that the beseeching I had recoiled from as a young person. There were prayers of exaltation, connection, and gratitude, as well as prayers asking for intercession.

Although I became more comfortable praying and being around prayers, I didn’t think much about how prayer works until I read Thich Nhat Hanh’s The Energy of Prayer. In it, he identifies the two most important elements of effective prayer:

The first is to establish a relationship between ourselves and the one we are praying to. It is the equivalent of connecting the electrical wire when we want to communicate by telephone.

The second element we need for prayer is energy. We have connected the telephone wire, now we need to send an electric current through it. In prayer, the electric current is love, mindfulness and right concentration.

Thich Nhat Hanh goes on to explain that although we can speak about the one who prays and the one who is prayed to, they are not separate entities. One is contained in the other:

The one who prays and the one prayed to are two realities that cannot be separated from each other. This is basic in Buddhism, and I’m quite sure that in every religion there are those who have practiced for a long time and have this understanding. They can see that God is in our heart. God is us and we are God.

According to Thich Nhat Hanh, when we truly pray, when we have established the connection and created the energy of love, mindfulness, and concentration, change immediately and inevitably occurs. In Buddhism, the mechanism of change is called the collective (or storehouse) consciousness. In Abrahamic religions, the equivalent mechanism is called the Omnipresent God.

We don’t need to send prayers anywhere, because God is omnipresent. There is no need to convert God into some divine telecommunications satellite in the sky. Prayer is unlimited by space or time. . . .

Having come to a new understanding of prayer, I now pray often, usually in simple ways. I offer prayers of appreciation and gratitude. Sometimes my praying takes the form of Metta (Loving Kindness) prayers: sending into the world my hopes for peace, justice, an end to suffering, and the dissolution of the roots of suffering. Sometimes I pray for particular people, “holding them in the light,” as the Quakers say.

For me, there is a deep and wonderful mystery in prayer: how “God is us and we are God.” It involves energies that touch the essence of life and existence. Rather than being separate from science, or anti-science, this mystery at the heart of prayer now seems related to modern science, especially what the physicists call quantum entanglement. The basic notion is that under certain conditions pairs of quantum particles can be created such that they are linked even when they are separated. When one is changed, the other is changed, instantly, even though there is no apparent channel of connection or communication between them. Many experimental results indicate this happens. The quantum physicists don’t understand how.

You are invited to join us this Thursday. After our meditation period, we will share our experiences with prayer, practice, and mystery.. 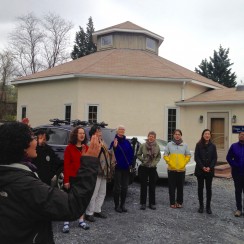