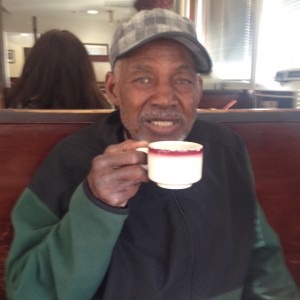 I met Clarence 33 years ago when the head of a spiritual community asked whether Ann-Mari and I would put him up for a few nights. He had just been released from prison and a group in the community had a rehabilitation plan for him that included work and housing (that would become available in a few days). Clarence’s participation in the rehabilitation plan lasted about four days. Our friendship began.

Clarence and I kept in touch. He called when he needed help with something. When he was in town — he was almost always on the move — we would have a meal together. Many times I helped Clarence deal with bureaucracies. His small bag was repeatedly lost or stolen. I helped him get new birth certificates, medical cards, state identity cards, bank cards, and so on. Our house became his mailing address.

Bit by bit I learned about Clarence’s life and history. He taught me how it was possible to live for decades without a regular job or a home. He spent a lot of time at truck stops, places full of transient people. His spending money often came from deals he made with the drivers of moving vans: for a fee he would drive with them to where they were going and help them unload.

In the 1980s and 90s he also served numerous prison terms, always for things he did while drunk, such as disturbing the peace or shoplifting. When he was imprisoned we corresponded. I sent him books and put money into his canteen accounts.

Often Clarence surprised us with his caring and thoughtfulness. When we talked, he inquired about my children. Once, when I was away on a retreat, he called Ann-Mari to wish her a happy Mother’s Day.

Clarence’s life changed about the time he turned sixty. A highway accident disabled him — for the rest of his life he had difficulty walking — and also made him eligible for disability payments. He traveled less, was imprisoned less, and drank somewhat less. I continued to talk to him or see him each month. He especially liked to talk about politics and the need for social change. Increasingly, I helped him navigate medical bureaucracies and obtain services.

Clarence and I spent more time together this past year, as numerous health issues arose, including an aggressive cancer. He was admitted about ten times to hospitals and medical facilities, including two stays at Christ House in DC. In each place the health workers recommended that he go into a nursing home where he could get regular meals and medical care. Each time he refused. He just wanted to get stronger and back on the road, off to somewhere.

Freedom and dignity were extremely important to Clarence. When he was young he worked some relatively unskilled jobs, such as washing dishes in restaurants. They didn’t last long. He didn’t want to kowtow to anyone. He didn’t want to be told what to do or when to do it. He could not, like Thoreau, take to the woods. Instead he lived on the edge, with few resources, and, as he saw it, with his dignity and freedom intact. Often it was not easy or pretty. But it was his way and he stuck to it. Right to the end.

Clarence died on August 31st in Silver Spring, Maryland. He would have been 78 this Wednesday.

I’m still a bit numb from his passing. I miss him. He was a friend, and in his own way, a teacher. I’m sad that he won’t call again. No more lunches and adventures together. And I’m also grateful to have known him for as long and as well as I did.

In the short essay offered below Ajahn Brahm talks about how, in his experience, grief is a learned response known only in some cultures. Rather than grief, Ajahn Brahm suggests that the passing of a life is a time for gratitude and celebration.

This Thursday evening, after our meditation period, I’ll talk some about Clarence and we will read the Ajahn Brahm essay. In our Dharma sharing we will focus on what we have learned about losing loved ones. Has our mindfulness practice given us new ways to understand and process the inevitable losses that come to each of us?

Grief, Loss, and Celebrating a Life
by Ajahn Brahm, from Who Ordered This Truck Load of Dung?

Grief is what we add on to loss. It is a learned response, specific to some cultures only. It is not universal and it is not unavoidable.

I found this out through my own experience of being immersed for over eight years in a pure, Asian-Buddhist culture. In those early years in a Buddhist forest monastery in a remote corner of Thailand, Western culture and ideas were totally unknown. My monastery served as the local cremation ground for many surrounding villages. There was a cremation almost weekly. In the hundreds of funerals I witnessed there in the late 1970s, never once did I see anyone cry. I would speak with the bereaved family in the following days and still there were no signs of grief. One had to conclude that there was no grief. I came to know that in northeast Thailand in those days, a region steeped in Buddhist teachings for many centuries, death was accepted by all in a way that defied Western theories of grief and loss.

Those years taught me that there is an alternative to grief. Not that grief is wrong, only that there is another possibility. Loss of a loved one can be viewed in a second way, a way that avoids the long days of aching grief.

My own father died when I was only sixteen. He was, for me, a great man. He was the one who helped me find the meaning of love with his words, “Whatever you do in your life, Son, the door of my heart will always be open to you.” Even though my love for him was huge, I never cried at his funeral service. Nor have I cried for him since. I have never felt like crying over his premature death. It took me many years to understand my emotions surrounding his death.

I found that understanding through the following story, which I share with you here.

As a young man I enjoyed music, all types of music from rock to classical, jazz to folk. London was a fabulous city in which to grow up in the 1960s and early 1970s, especially when you loved music. I remember being at the very first nervous performance of the band Led Zeppelin, at a small club in Soho. On another occasion, only a handful of us watched the then-unknown Rod Stewart front a rock group in the upstairs room of a small pub in North London. I have so many precious memories of the music scene in London at that time.

At the end of most concerts I would shout “More! More!” along with many others. Usually, the band or orchestra would play on for a while. Eventually, though, they had to stop, pack up their gear and go home. And so did I. It seems to my memory that every evening when I walked home from the club, pub, or concert hall, it was always raining. There is a special word to describe the dreary type of rain often met with in London: drizzle. It always seemed to be drizzling, cold, and gloomy as I left the concert halls. But even though I knew in my heart that I probably would never get to hear that band again, that they had left my life forever, never once did I feel sad or cry. As I walked out into the cold, damp of the London night, the stirring music still echoed in my mind, “What magnificent music! What a powerful performance! How lucky I was to have been there at the time!” I never felt grief at the end of a great concert.

And that is exactly how I felt after my own father’s death. It was as if a great concert had finally come to an end. It was such a wonderful performance. I was, as it were, shouting loudly, “More! More!” when it came close to the finale. My dear old dad did struggle hard to keep living a little longer for us. But the moment eventually came when he had to “pack up his gear and go home.” When I walked out of the crematorium at Mortlake at the end of the service into the cold London drizzle–I remember the drizzle clearly–knowing in my heart that I would probably not get to be with him again, that he had left my life forever, I didn’t feel sad; nor did I cry. What I felt in my heart was, “What a magnificent father! What a powerful inspiration was his life. How lucky I was to have been there at the time. How fortunate I was to have been his son.” As I held my mother’s hand on the long walk into the future, I felt the very same exhilaration as I had often felt at the end of one of the great concerts in my life. I wouldn’t have missed that for the world.

Grief is seeing only what has been taken away from you. The celebration of a life is recognizing all that we were blessed with, and feeling so very grateful.