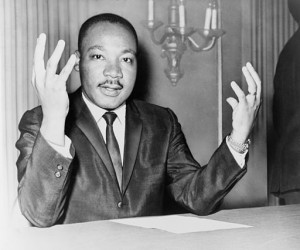 When I reflect this week on Martin Luther King, Jr’s life, my thoughts dwell on his moral courage. In his mid-twenties, he fully committed himself to the eradication of segregation, racism, and injustice, despite the dangers to which it would expose him. He could not turn back and simply become a successful African-American preacher. And with that commitment, came an energy and a clarity.

My sense is that we most honor Martin Luther King, Jr, by closely studying his words and actions, and by incorporating his wisdom into our lives. This Thursday evening, after our sitting meditation, we will listen to “Conscience and the Vietnam War,”a talk King gave in November,1967. It was the second of five Massey Lectures aired by the Canadian Broadcasting Corporation.

King began the talk explaining why as a minister and a civil rights leader he felt compelled to speak out against U.S. actions in Vietnam:

For those who ask the question “aren’t you a civil rights leader?”—and thereby mean to exclude me from the movement for peace—I answer by saying that I have worked too long and hard now against segregated public accommodations to end up segregating my moral concern. Justice is indivisible. It must also be said that it would be rather absurd to work passionately and unrelentingly for integrated schools and not be concerned about the survival of a world in which to be integrated. I must say further that something in the very nature of our organizational structure in the Southern Christian Leadership Conference led me to this decision. In 1957, when a group of us formed that organization, we chose as our motto: “To save the soul of America.” Now it should be incandescently clear that no one who has any concern for the integrity and life of America today can ignore the present war.

Then King turned to the need for an international perspective. For King, the revolution in values needed to end injustice in the United States would necessarily lead to questioning the past and current actions that sustained injustice in other lands:

These are revolutionary times; all over the globe men are revolting against old systems of exploitation and oppression. The shirtless and barefoot people of the land are rising up as never before. “The people that walked in darkness have seen a great light.” We in the West must support these revolutions. It is a sad fact that because of comfort, complacency, a morbid fear of Communism, and our proneness to adjust to injustice, the Western nations that initiated so much of the revolutionary spirit of the modern world have now become the arch-anti-revolutionaries. … We must find new ways to speak for peace in Vietnam and for justice throughout the developing world, a world that borders on our doors. If we do not act, we shall surely be dragged down the long, dark, and shameful corridors of time reserved for those who possess power without compassion, might without morality, and strength without sight.

You are invited to join us. In our Dharma sharing we will focus on how our practice of engaged mindfulness has been nourished by the life of Martin Luther King, Jr.

An audio recording of King’s “Conscience and the Vietnam War” talk is available on line. The text is available in The Trumpet of Conscience, a collection of the five Massey lectures. Related excerpts on interbeing and nonviolence from the fifth talk, the 1967 "Christmas Eve Sermon on Peace" are below.

Excerpts from Dr. King’s 1967 Christmas Eve Sermon on Peace, delivered at the Ebenezer Baptist Church in Atlanta, Georgia (and aired as the fifth Massey Lecture)

I have said that the problem, the crisis we face, is international in scope. In fact, it is inseparable from an international emergency which involves the poor, the dispossessed, and the exploited of the whole world. Can a nonviolent, direct-action movement find application on the international level, to confront economic and political problems? I believe it can. It is clear to me that the next stage of the movement is to become international. National movements within the developed countries—forces that focus on London, or Paris, or Washington, or Ottawa—must help to make it politically feasible for their governments to undertake the kind of massive aid that the developing countries need if they are to break the chains of poverty. We in the West must bear in mind that the poor countries are poor primarily because we have exploited them through political or economic colonialism. Americans in particular must help their nation repent of her modern economic imperialism.

We have experimented with the meaning of nonviolence in our struggle for racial justice in the United States, but now the time has come for man to experiment with nonviolence in all areas of human conflict, and that means nonviolence on an international scale. Now let me suggest first that if we are to have peace on earth, our loyalties must become ecumenical rather than sectional. Our loyalties must transcend our race, our tribe, our class, and our nation; and this means we must develop a world perspective. No individual can live alone; no nation can live alone, and as long as we try, the more we are going to have war in this world. Now the judgment of God is upon us, and we must either learn to live together as brothers or we are all going to perish together as fools.

It really boils down to this: that all life is interrelated. We are all caught in an inescapable network of mutuality, tied into a single garment of destiny. Whatever affects one directly, affects all indirectly. We are made to live together because of the interrelated structure of reality. Did you ever stop to think that you can’t leave for your job in the morning without being dependent on most of the world? You get up in the morning and go to the bathroom and reach over for the sponge, and that’s handed to you by a Pacific islander. You reach for a bar of soap, and that’s given to you at the hands of a Frenchman. And then you go into the kitchen to drink your coffee for the morning, and that’s poured into your cup by a South American. And maybe you want tea: that’s poured into your cup by a Chinese. Or maybe you’re desirous of having cocoa for breakfast, and that’s poured into your cup by a West African. And then you reach over for your toast, and that’s given to you at the hands of an English-speaking farmer, not to mention the baker. And before you finish eating breakfast in the morning, you’ve depended on more than half of the world. This is the way our universe is structured; this is its interrelated quality. We aren’t going to have peace on earth until we recognize this basic fact of the interrelated structure of all reality. 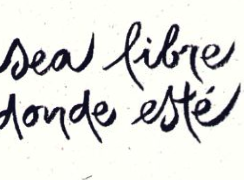 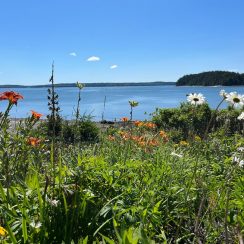