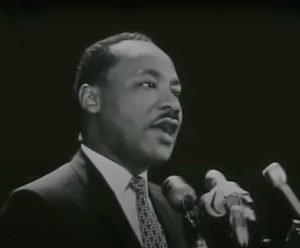 These three quotations, spanning nearly fifty-four years, speak to the historical moment in which we find ourselves:

When the insurrectionists came at the Capitol, they came with symbols.

Some were immediately identifiable by most Americans watching the chaos unfurl on their screens. The Confederate flag, first swung on the country’s battlefields by secessionist states who saw their future in the enslavement of others; the gallows and noose, shorthand for the terrorization of African-Americans under Jim Crow as well as quick and dirty frontier justice. — Kristin Romey, National Geographic, January 12, 2021

We are the country that had a reconstruction movement and then had a violent, meanspirited regression. We had a civil rights movement and then a regression. We have a strange history as a country, but there is another side: After Woodrow Wilson and Hoover, we get Roosevelt. Roosevelt pushes through Social Security, minimum wage, union rights, leads us through a war. He puts the first Black people in the cabinet. …

The way to heal the soul of the nation is to pass policies that heal the body of the nation. It’s the just thing to do. That’s how we as a nation can together move forward. –  Dr. William Barber, New York Times, December 28, 2020

In 1964 the Civil Rights Bill came into being after the Birmingham movement which did a great deal to subpoena the conscience of a large segment of the nation to appear before the judgment seat of morality on the whole question of Civil Rights. After the Selma movement in 1965 we were able to get a Voting Rights Bill. And all of these things represented strides.

I want to close by saying this afternoon, that I still have faith in the future. And I still believe that these problems can be solved. And so I will not join anyone who will say that we still can’t develop a coalition of conscience. – Martin Luther King, Jr.,  Stanford University, April 14 1967

For many years now, the Still Water community has celebrated Martin Luther King, Jr. by watching videos of his speeches during the week the nation observes a holiday in his honor. Given the events of the past two weeks, there is no better time than now.

Martin Luther King, Jr. and Thich Nhat Hanh (Thay) were friends and shared values: they both dedicated their lives to love, compassion, and relieving suffering. Thay wrote to a friend immediately after hearing about the killing of King in 1968:

The last time I saw him is in Geneva, at the Pacem in Terris II conference. I was up in his room in a morning, having breakfast and discussing about the situation. We had scrambled eggs and toasts and teas. I told him: “Martin, do you know something? The peasants in Vietnam know about what you have been doing to help the poor people here and to stop the war in Vietnam. They consider you as a bodhisattva.”

A bodhisattva. An enlightened being trying to work for the emancipation of other human beings. He did not say anything but I knew he was so moved by what I said. – Letter, April 5, 1968

This Thursday and Friday evenings we will watch several segments from a prescient speech King gave on April 14th, 1967, at Stanford University. The talk, titled “The Other America,” focused on race, racism, and poverty in the United States. King believed that a majority of Americans will eventually come to understand that:

After watching the talk, our Dharma sharing will being with these questions:

We hope you can join us.

The final paragraphs of the Stanford talk are below.

Final Paragraphs from “The Other America”

I refuse to despair. I think we’re gonna achieve our freedom because however much America strays away from the ideals of justice, the goal of America is freedom.

Abused and scorned though we may be, our destiny is tied up in the destiny of America. Before the pilgrim fathers landed at Plymouth we were here. Before Jefferson etched across the pages of history the majestic words of the Declaration of Independence, we were here. Before the beautiful words of the Star Spangled Banner were written, we were here. For more than two centuries, our forebearers labored here without wages. They made cotton king. They built the homes of their masters in the midst of the most humiliating and oppressive conditions. And yet out of a bottomless vitality, they continued to grow and develop.

And I say that if the inexpressible cruelties of slavery couldn’t stop us, the opposition that we now face, including the so-called white backlash, will surely fail. We’re gonna win our freedom because both the sacred heritage of our nation and the eternal will of the Almighty God are embodied in our echoing demands.

With this faith, we will be able to transform the jangling discourse of our nation into a beautiful symphony of brotherhood. With this faith, we will be able to speed up the day when all of God’s children, black men and white men, Jews and Gentiles, Protestants and Catholics, will be able to join hands and live together as brothers and sisters, all over this great nation. That will be a great day, that will be a great tomorrow. In the words of the Scripture, to speak symbolically, that will be the day when the morning stars will sing together and the sons of God will shout for joy.