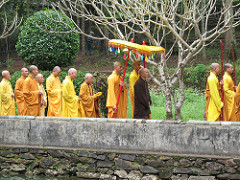 Discussion date: Thu, May 03, 2007 at our weekly Thursday evening practice

Dear Still Water Friends,
This Thursday evening, during our program, I will talk about my month in Vietnam with Thich Nhat Hanh, and especially about a line of poetry he used in several of his Dharma talks: “Using a silk thread of the lotus stem you can take control of the mighty tiger.”

The line was from a poem by Tran Tung, a 13th century emperor in the Tran dynasty who led Vietnam during its defeat of the Mongol invasion. In his late life he retired to a practice center, became a lay Zen master, and founded the Bamboo Grove School of Vietnamese Zen.

Thich Nhat Hanh explained that if one breaks a lotus stem, the two parts are held together by thin, strong fibers, which are like threads of silk.

The mighty tiger, which can also be translated as wild beast, represent our destructive habit energies, the things we do, time and again, that bring suffering to ourselves and to others.

Being able to control and transform our inner wild beast with just a silk strand represents the gentleness of mindfulness practice. We don’t need to do much, we just need to do it with consistency and focus. As Thich Nhat Hanh explained in one talk:

Conscious breathing and walking meditation are very gentle. But if we do them, we can recognize the habit energy when it begins to manifest, and we can prevent it from

Please join us if you can.