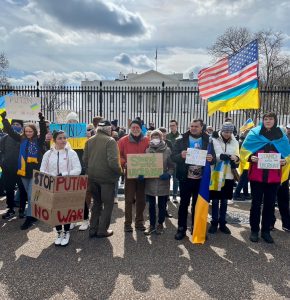 I am saddened and upset by the Russian invasion of Ukraine. I feel it personally. My grandparents came from Russia, Belarus, and Slovakia. In my twenties I traveled in Poland, Ukraine, and Russia. For several years, while conducting research on schooling and adolescence, I lived in Romania while it was a communist dictatorship.

I am also appalled by bullying of any kind. When a large authoritarian country mercilessly tries to crush a smaller, neighboring democracy, I feel it viscerally. Ukrainian suffering is my suffering.

On Saturday I went with a few others to the White House to be part of Stand with Ukraine demonstration. The crowd was about ninety percent Ukrainian Americans. Those we talked with were a bit surprised and very grateful that we were joining them, even though we were not of Ukrainian descent. It felt right to be there. It feels right to Stand with Ukraine. And yet, I keep questioning myself. I know how easy it is for me during a conflict to move into a good versus evil, us versus them mentality. How easy it is to simplify and to blame.

I appreciate the nuanced approach to conflict and the use of force offered by Thich Nhat Hanh (Thay). When asked in a 2003 interview, “Are there times when it is necessary to use violence in order to protect yourself, or protect your family, or your country?” he replied:

In 1970, the then thirty-five-year-old Dalai Lama expressed a similar view to a group of young Americans who were studying with him in Dharamasala. They asked him about the shooting of student protesters at Kent State University by National Guardsmen. Jan Willis, a committed Buddhist practitioner and an African-American student activist, recounts the conversation in her memoir, Dreaming Me: Black, Baptist, and Buddhist — One Woman’s Spiritual Journey:

“Given that we have taken bodhisattva vows, Your Holiness, what are we to do if, once back in the States, we find ourselves in a position where we too are facing policemen or National Guardsmen who want to shoot us?” Talking with the Dalai Lama brought up again for me my old dilemma about violence versus peace. Back at Cornell and on my subsequent trip to California, perhaps to Join the Black Panthers, I had had my own near brushes with violence, and I had thought a lot about the possible consequences of armed confrontation. Though I had chosen to turn away from violence, I was still concerned about becoming too passive. I knew that the Dalai Lama himself had had to face similar issues when his own country was violently invaded by the Chinese. His Holiness became intensely reflective. Then with deliberate and attentive clarity, he advised us as follows:

“You have now entered upon the Mahayana path. That is very good. Very good, indeed. The Mahayanist, the bodhisattva, as you know, works for the benefit of beings. He or she wishes to aid beings wherever they are in need. You should know that your first duty, now that you are on this path, is to practice patience. You are meditating to gain clarity. You must have clarity in order to act appropriately. With patience and with clarity you know with certainty whether you can or cannot help in a given situation. If, after looking at the situation with clarity, you determine that you cannot help, then it is better not to worry. Worry accomplishes nothing. But if you are clear and you can help, then you will know what to do and how to do it. So, patience and clarity are essential.”

“Yes, Your Holiness,” my impatience made me push, “but what if you think you have looked at all the alternatives–with clarity–and you find that your only course of action is to be on that line along with others, facing those policemen or those guardsmen, then what?”

“Again,” he said, “patience is most important. But if you are certain that there is no other alternative, if you are clear and certain about this, then what you must do is this: First, you must think lovingly and with compassion about the policeman. If you think or call him a pig, then you must let him shoot you!  But if you can wish him well, and pray for his future happy rebirth, then of course, you stop him from harming the others. You stop him by any means necessary.” We were relieved and amazed.

This Thursday evening after our meditation period, our Dharma sharing will focus on how we can practice peace in the face of conflict and the use of force such as we see in Ukraine.

A related excerpt on military action and mindfulness by Thay is below.

Compassion is the Best Protection, the Wisest Defense

by Thich Nhat Hanh, from an Interview with Beliefnet.com

Question: If military action is incompatible with mindfulness and compassion, how should people/nations defend themselves? (You have said that when we are mindful, “compassion becomes possible.” Is a lack of mindfulness what our moral failings boil down to?)

Answer: There are many ways to defend ourselves: through diplomatic foreign policy, forming alliances with other countries, humanitarian assistance. These are all approaches motivated by the wisdom of interbeing, not just by political gain. In these kinds of approaches to resolving conflict, the army doesn’t have to do much. They can serve the people, build bridges, roads, etc. This is not idealistic thinking, armies have worked this way in the past. With good foreign policy, the army will not have to fight.

When a country is invaded, the army should resist and defend the people. It is also sometimes necessary for other countries to help a country that is being invaded. But we should never attack other countries out of national interest. The only really necessary and appropriate circumstance under which an army should resort to violence is to defend itself or an ally from invasion. And even in this case, much suffering will result.

Military action can be compassionate if it is real compassion. But if compassion is just a screen to mask anger and fear, it is useless. What is upsetting to me is that former generations have committed the same mistakes and we don’t learn from them. We haven’t learned enough from the war in Vietnam. There were so many atrocities committed there. So many innocent people were tortured and killed by both sides because they were perceived to be ‘communist’, or ‘anticommunist.’

Mindfulness has so many layers. When we kill because we think that the other person is evil, that we are killing for the sake of peace, that we are doing a good thing, this is not right mindfulness. If we are mindful, we will see not only the present situation, but also the root and the consequence of our act in that moment. Other insights should arise if we are truly mindful: “this person I want to kill is a living being. Is there any chance for him to behave better and change his present, harmful state of mind? Maybe I have a wrong perception and one day I will see that he is just a victim of misunderstanding, and not really the evil person I think he is.” Mindfulness also helps a soldier to see that he or she may just be an instrument for killing used by his or her government.

A general who is mindful of his actions is capable of looking deeply. He may not need to use weapons. He will see that there are many ways to deter the opposite side and he will exhaust all other means before resorting to violence. And when nothing else works, he may use violence, but out of compassion, not out of anger.