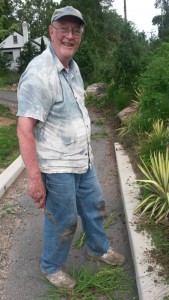 I was born in 1937 in Portland, Oregon. My parents were ‘traditionalists,’ and had been brought up by traditionalist parents themselves. They loved me, and I knew they loved me, but their child-rearing philosophy was primarily to get the child to “be good” through a variety of punishments, mostly spankings, not through positive reinforcement.

I didn’t understand the “why” of what they wanted. It seemed to me that I was often in the wrong. This could be painful. I learned not to take any initiative of my own, but to be mostly passive. The early photos of me as a child often show a sad, wistful smile on my face. I wasn’t very active physically and gained weight.

I was supposed to be a “good little boy.” Deep inside, I harbored a lot of simmering anger about this. WHY was I always in the wrong? WHY was it that I was being spanked so often? Once in a while, I angrily challenged what I considered unfair or unreasonable criticism. I tried to point out that my parents weren’t perfect either, and they, too, sometimes did bad things. There was never a discussion. I would get criticized or spanked some more. There was no interaction. No reconciliation. No way to work anything through to some kind of understanding. Just doors slamming and people being angry. Then we were supposed to forget about it.

Sex was never spoken of in our house. Not once in all the time I was growing up. There was little physical touching or intimacy. My mother was embarrassed by too much touching.

My motivational pattern came to be to try to “be good,” and do things the right way – perfectly when possible.

I went to Sunday School every Sunday morning. I sought to be teacher’s pet. I thought other kids didn’t like me, and envied those who seemed to do what they pleased, and behave spontaneously, without shame or guilt. I got good grades, and I was sure that made the other kids dislike me more. I didn’t develop any social skills. Instead, I developed fantasies and grandiose ambitions, of ways I would someday overcome my inferior status – and be better than everyone else. That is how I wanted to think of myself, anyhow, to overcome the pain of feeling that I was empty inside, a phony, a brown-noser. I didn’t know who I was or what to do.

After I graduated from High School (with excellent grades), I was put on a train and sent off to college at Harvard. The next four years were a pretty miserable experience for me, but I managed to graduate. I barely was able to complete my academic requirements. I had no social skills and no social life. I began to feel sexually attracted to other men my age, and I felt miserable about that at first. I thought this was not who I wanted to be. I would cry and beat my head against the wall of my college dorm room.

I looked up homosexuality in the college course catalogue to see if I could find any insight that might help. The topic was only mentioned under a course called “Criminology,” so I took it. Needless to say, that course didn’t help me at all. It had one good outcome, however, in the sense that it led me to conclude that so-called “professionals” didn’t know anything about this topic and I wasn’t going to get any help there, so I had better accept who I was, and figure out what to do on my own. I think I was very lucky in this.

After college I went into the Navy for two years under ROTC, and started drinking heavily. When I went back to graduate school in city planning, I started drinking even more heavily, going out to cruise the gay bars in Boston several nights a week. I found that when I got drunk, I could act on urges I could hardly even acknowledge when I was sober. At last, I thought I had found an escape from my imprisonment and repression. I could be spontaneous. I could be FREE! I thought that alcohol was the answer, when it was really an escape mechanism so I wouldn’t have to deal with what was inside me.

When I was 40, some (gay) friends staged an intervention on me. I went to my first meeting of a “Twelve Step” support group for alcoholics. That was in 1978. A miracle happened. I have been sober since, and I began to develop a spiritual life. It has been an on-going process, one day at a time. At one of my first meetings, I said, “My name is Wayne, and I am an alcoholic. I don’t know who I am, or what to do, and I don’t care.” I felt totally bankrupt spiritually – completely empty inside. They told me not to pick up the first drink, and keep coming back, at least one meeting a day, and they promised that I would get better. They didn’t give me any more complicated advice than that at first. I followed that advice, and it worked. I am profoundly grateful.

Step One of the program was to recognize that I was powerless over alcohol, and that I didn’t have the ability to overcome the ‘disease of alcoholism’ on my own. I needed help. They said I needed to turn my life and my will over to the care of a "Higher Power", however I wanted to define that term. I couldn’t even read the literature then, or understand the principles, but I could keep coming back, and listening to other people’s stories. They had been through the same things I had. I stayed sober, and kept coming back. I gradually began to “clear up,” and things began getting better.

Over time, I’ve learned to like not knowing what each day might bring, but feeling certain that if I open myself up to a “Higher Power,” or to a “Spirit of Light” every morning, and try to put living a spiritual life first, I will get the guidance I need. I have slowly been able to deflate the power of my fears, resentments, self-centeredness, and self-pity. Now, with the help of my meditation practice, I can look deeply into my mind, and identify old scenarios that I keep re-running in my current affairs with other people. I get along better with other people. I can offer love and compassion to others, and think more of others, and less of myself.

I am willing now to go to those places in my mind – in my meditation practice – that I used to be afraid to go, in the past, because of the deep pain I thought I was going to encounter. I didn’t think I could handle it. This meditation practice has shown me that I can handle it. I can go there – and feel the old pains, fears, and resentments. I can become more aware. I can stop sticking a “second arrow” into myself. When I stop doing that, healing can begin. And I come away stronger for it.

Pema Chodron, in her book Comfortable with Uncertainty, has the following profound insight:

Start where you are (again and again)

So start where you are, water the seeds, nourish and encourage what is good in yourself. Gradually, the false scenarios, dreams, and ambitions will drop away. Let the sunlight come in.

This Thursday night, after our meditation practice, we will explore how our spiritual practice has helped us to start where we are, learning to have the courage to look deeply at ourselves, just as we are. You are invited to be with us.