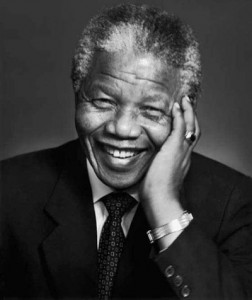 Few people in the twentieth century embodied courage and moral leadership as fully as Nelson Mandela. President Barack Obama, at the memorial for Nelson Mandela on December 10, 2013, spoke to the strengths of this great man:

Mandela understood the ties that bind the human spirit. There is a word in South Africa — Ubuntu – that describes his greatest gift: his recognition that we are all bound together in ways that can be invisible to the eye; that there is a oneness to humanity; that we achieve ourselves by sharing ourselves with others, and caring for those around us.

We can never know how much of this was innate in him, or how much of was shaped and burnished in a dark, solitary cell. But we remember the gestures, large and small – introducing his jailers as honored guests at his inauguration; taking the pitch in a springbok uniform; turning his family’s heartbreak into a call to confront HIV/AIDS – that revealed the depth of his empathy and understanding.

He not only embodied Ubuntu; he taught millions to find that truth within themselves. It took a man like Madiba to free not just the prisoner, but the jailer as well; to show that you must trust others so that they may trust you; to teach that reconciliation is not a matter of ignoring a cruel past, but a means of confronting it with inclusion, generosity and truth. He changed laws, but also hearts.

This Thursday evening, after our meditation period, we will listen to to a short audio of Rev. Desmond Tutu memorializing Nelson Mandela. Then, with the memory of Mandela in our hearts, we will recite together the Five Mindfulness Trainings. Our Dharma discussion will focus on the Second Mindfulness training, which begins:

I am hoping that the juxtaposition of Mandela’s life and the readings of the Trainings will allow us to appreciate and learn from the magnanimity of spirit he offered to all during the final decades of his life.

I invite you to be with us.

The full text of the Second Mindfulness Training is below, along with a partial transcription of the words of Desmond Tutu.

Please note also the announcements below: during April Still Water will offer its first Easter Weekend Three-Day Practice Retreat, and in May will offer a Family Week-End Retreat and a Day of Practice.

People cared about Nelson Mandela, loved him, because of his courage, convictions and care of others’. He set aside the bitterness of enduring 27 years in apartheid prisons – and the weight of centuries of colonial division, subjugation and repression – to personify the spirit and practice of Ubuntu. He perfectly understood that people are dependent on other people in order for individuals and society to prosper.

He transcended race and class in his personal actions, through his warmth and through his willingness to listen and to emphasise with others. And he restored others’ faith in Africa and Africans.

Was Nelson Mandela an anomaly, an exception that proves the rule?

I would say, no. Certainly, he was exceptional. But the spirit of greatness that he personified resides in all of us. Human beings are made for greatness. Nelson Mandela embodied and reflected our collective greatness. He embodied our hopes and our dreams. He symbolised our enormous potential, potential that has not always been fulfilled.

Nelson Mandela was not a lone wolf, and he did not fall from the sky. He learned about leadership and culture growing up in the care of AbaThembu Regent Jongintaba after the death of his father. He learned from the experience of developing a voice for young people in anti-apartheid politics, and from physically prosecuting the struggle. He learned from the comrades who surrounded him, an extraordinary generation of leaders. To all of this, the crucible of prison seemed to add a deep understanding of the human condition and a profound ability to empathise with others.

Like a most precious diamond honed deep beneath the surface of the earth, the Madiba who emerged from prison in January 1990 was virtually flawless.

Did he have weaknesses?

Of course he did, among them his steadfast loyalty to his organisation and to some of his colleagues who ultimately let him down. He retained in his cabinet underperforming, frankly incompetent ministers. This tolerance of mediocrity arguably laid the seeds for greater levels of mediocrity and corruptibility that were to come.

Was he a saint?

Not if a saint is entirely flawless. I believe he was saintly because he inspired others powerfully and revealed in his character, transparently, many of God’s attributes of goodness: compassion, concern for others, and a desire for peace, forgiveness and reconciliation.

(Text and audio available on line.)