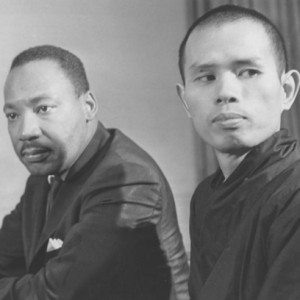 In June of 1965 Thich Nhat Hanh wrote a letter to Dr. Martin Luther King, Jr., about the unreported misery the War in Vietnam was bringing to civilian populations. He particularly wanted to explain that the monks who immolated themselves were not despairing or violent. Their immolations were acts of compassion. The monks felt that there was no other way they could communicate to the world the suffering of the people of Vietnam. In that letter, Thich Nhat Hanh also wrote: “You are fighting for human rights. We are struggling for peace. We are in the same front. We should join together.”

A year later, in 1966, Thich Nhat Hanh met Martin Luther King, Jr., in Chicago. They talked about the war in Vietnam and about community building. In his 2011 retreat in Washington, DC, with Members of Congress, Thich Nhat Hanh said about that meeting:

For us, our ideal, our hope can only be realized if we have a solid, beautiful community. I think from that day on, the “beloved community” began to be discovered as something that could be done in the here and the now, in our own organization. The Southern Christian Leadership Conference should begin to represent that “beloved community.”

Unfortunately, Martin did not have a chance to continue his sangha building, his community building, because he was assassinated not very long after that. For myself, even though I was not allowed to go home, even though I had to stay in exile for almost 40 years, I was able to make friends with many people in Europe and American and Asia, and they have helped me to build a community. I continue the work of Dr. King.

Fifty-two years ago Martin Luther King, Jr., gave his “I have a dream” speech at the conclusion of the 1963 March on Washington for Jobs and Freedom. Watching a video of the speech, I am awed by the connection he makes with the 300,000 people in front of him at the Lincoln Memorial. His connection is especially strong during the last few minutes of the speech, when he departs from his prepared text and moves with the energy of the moment, preaching from his heart, sharing his dream.

This Thursday evening after our meditation period, we will watch together the “I Have a Dream” speech and reflect on the dreams of Martin Luther King, Jr. and Thich Nhat Hanh, and on the dreams for a better world that we now hold.

I invite you to join us.

Below are brief excerpts on Martin Luther King, Jr.’s Buddhist vision, by Charles Johnson, and on Bodhisattva Warriors, by Pema Chodron. If you are not able to be with us, I invite you to watch the “I Have a Dream” speech on your own this week.

Smiling Like a Buddha: A Ten-Session Mindfulness Meditation Class begin next Monday, January 26th, at Crossings in Silver Spring.

by Charles Johnson, from "A Sangha by Another Name," a 1999 article on Buddhism and Black America

By the mid-1950s, as the Beats looked toward Zen, so did a few black musicians and poets; and of course by then the Civil Rights Movement was underway, led magnificently by Dr. Martin Luther King Jr., who took Mahatma Gandhi as his inspiration. After a pilgrimage to India in 1958, where he visited ashrams and sought to learn more about nonviolence not simply as a political strategy but as a way of life, King came back to America determined to set aside one day a week for meditation and fasting. In the 1960s, he nominated for the Nobel Peace Prize the outstanding Vietnamese Buddhist teacher Thich Nhat Hanh. King was, at bottom, a Baptist minister, yes, but one whose vision of the social gospel at its best complements the expansive, Mahayana bodhisattva ideal of laboring for the liberation of all sentient beings (“Strangely enough,” he said, “I can never be what I ought to be until you are what you ought to be. You can never be what you ought to be until I am what I ought to be”). His dream of the “beloved community” is a sangha by another name, for King believed that, “It really boils down to this: that all of life is interrelated. We are caught in an inescapable network of mutuality, tied in a single garment of destiny.”

By Pema Chodron, from Comfortable with Uncertainty

Those who train wholeheartedly in awakening bodhichitta are called bodhisattvas or warriors — not warriors who kill but warriors of nonaggression who hear the cries of the world. Warrior-bodhisattvas enter challenging situations in order to alleviate suffering. They are willing to cut through personal reactivity and self-deception. They are dedicated to uncovering the basic, undistorted energy of bodhichitta. A warrior accepts that we can never know what will happen to us next. We can try to control the uncontrollable by looking for security and predictability; always hoping to be comfortable and safe. But the truth is that we can never avoid uncertainty. This not-knowing is part of the adventure. It’s also what makes us afraid.

Wherever we are, we can train as a warrior. Our tools are sitting meditation, tonglen, slogan practice, and cultivating the four limitless qualities of loving-kindness, compassion, joy, and equanimity. With the help of these practices, we will find the tenderness of bodhichitta in sorrow and in gratitude, behind the hardness of rage and in the shakiness of fear. In loneliness as well as in kindness, we can uncover the soft spot of basic goodness. But bodhichitta training offers no promise of happy endings. Rather, this "I" who wants to find security — who wants something to hold on to — will finally learn to grow up. If we find ourselves in doubt that we’re up to being a warrior-in-training, we can contemplate this question; "Do I prefer to grow up and relate to life directly; or do I choose to live and die in fear?"