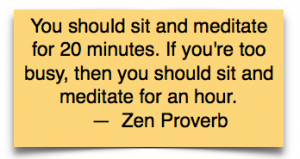 Recently, busyness has been on my mind.

Partly because it seems this past month I have allowed things to stack up and I have more things on my “to do” list than I usually do: projects, classes, writing, event planning, reducing an over-stuffed email inbox, decluttering, deferred home maintenance, being with friends and family, and so on. The usual stuff.

And partly because I’m finding that the mind-state of busyness is very interesting to observe. When I feel “too busy,” or even just “busy,” a mild state of panic sets in. I focus on what needs to be done, make a list, and start doing one of the tasks. Things get done, but I’m not as fully present as I would like to be. I’m easily distracted. I’m not very creative. I’m not enjoying what I’m doing. It feels like a task-master is pushing me along.

When I’m aware of my busyness, when I catch myself being busy, it is a bell of mindfulness. I know it doesn’t have to be that way. One of my favorite essays is Resisting the Demon of Busyness by Janet Ruffing. For Ruffing, busyness is an attitude or orientation we take on, not a consequence of the situation in front of us.

busyness is a state of mind and a habit of the heart rather than merely a result of the number of tasks to be accomplished in any specific unit of time. …

Often “very busy” people, that is, people who carry major responsibility, manage to “have all the time” in the world. They do not create an added infusion of “busyness” in their internal attitude toward the work of the day or the conduct of relationships. They do not appear to be racing against the clock. When you are with them, you feel as if you are the only one with whom they are concerned. They do not rush you. They do not rush themselves. They are present, spontaneous, relaxed, receptive. They are able to pay attention to deeper levels of reality.

Sister Jina, a senior nun now at Deer Park, explains concretely how she manages to be active and engaged, but not in a hurry:

When we walk in a hurried way we don’t rest in every step. Instead, we seem to quickly touch the earth in order to get somewhere. So I practice taking the hurry out of my steps so that I can come to rest in every step. It is a bit tricky because there is something in me that tells me if you don’t hurry you will be late. But I also experience that if I don’t hurry I will get there much faster because the hurry comes from the worry and the worry is very heavy and slows me down. If I drop the hurry and the worry I can move a bit quicker and be in every step and be on time. You can try, it is very interesting to experiment with that. You can meet this habit energy that says you have to hurry or you will be late. You can move faster but you don’t need to hurry. It is very handy when you are at the airport and a bit late.

So if busyness is not helpful or sustaining, why is it so common? Janet Ruffing’s insight is that we become overwhelmed by busyness because of ego and institutional pressures. We lose our mindful connection with our bodies and hearts:

. . . there is something about the feeling of busyness that is exhilarating. There is an altered state of consciousness I experience when I swing into action and begin working through today’s “to do” list. A burst of adrenalin carries me from one activity to another. How many things can I get done in the shortest amount of time? Racing against the clock becomes a game, sometimes an unhealthy competition, but nevertheless a game. While I am occupied orchestrating this internal race against time, I can feel both strong and important. My ego is firmly in control. I am clearly the centre of these activities. This particular state of mind is, of course, illusionary. . . .

When I am busy being busy, I avoid making time for leisure, for play, for relationships, for reflection. I take delight in moving fast, being caught up in the rhythm of an institution, a city, a community that runs me, that overwhelms my internal sense of self and my felt responses to internal and external events. I am actually being captivated by a “false” consciousness that is largely generated by the culture outside of me. I go on automatic while believing I am still in charge. When I am busy, I can believe myself to be incredibly important to the scheme of things. I become indispensable, necessary. My ego becomes reassured (while this state lasts) that I am productive, accomplishing something worthwhile and valuable.

Please join us this Thursday for an (unhurried) meditation period and for a Dharma Sharing on busyness in our lives. Do you feel pushed around by your busyness? Do your agree with Janet Ruffing that our busyness comes not from the length of our to do-lists, but from our egos and our acquiescence to institutional pressures?

Below is an excerpt by Thich Nhat Hanh on how he dealt with an especially stressful day with far too many things to do.

Registration has now opened for Nurturing True Presence: Still Water Mindful Family Retreat, Friday, November 13 to Sunday, November 15, 2015 at the Charter Hall Retreat Center in Perryville, Maryland. Space in the lodge is limited, you may wish to register soon.

If You Want Peace, Peace is With You Immediately

from The Sun My Heart by Thich Nhat Hanh

Fifteen years ago, I wrote four Chinese characters on a paper lamp shade. These four characters can be translated as, “If you want peace, peace is with you immediately.” A few years later, in Singapore, I had the chance to practice these words.

Several of us organized a program to help the Indochinese refugees in the Gulf of Siam. The program was called Mau Chay Ruot Mem (“When blood is shed, we all suffer”). At that time, the world did not know about the “boat people,” and the governments of Thailand, Malaysia, and Singapore would not allow them to land. So we hired two large ships, the Leapdal and the Roland, to pick up refugees on the open sea, and two small ships, the Saigon 200 and the Blackmark, to communicate between them and to transport food and supplies. We planned to fill the two large ships with refugees and take them to Australia and Guam. We had to do our work secretly, since the situation of the boat people was something most of the world’s governments did not want to acknowledge at that time, and we knew they would give us a hard time if they found out.

Unfortunately, after nearly 800 refugees had been rescued from small boats at sea, the government of Singapore discovered our program. At 2:00 one morning, the Singapore police were ordered to surround the house where I was staying. One officer blocked the front and another the back, while four others rushed in and confiscated my travel documents. They ordered me to leave the country within 24 hours.

With 800 people aboard our two large ships, we had to find a way for them to travel safely to Australia or Guam. The Saigon 200 and the Blackmark were not allowed to leave port to take food and water to the refugees on the Leapdal and the Roland. The Roland had enough fuel to reach Australia if we could get food to them. Then its engine broke down. The day was very windy and the sea quite rough, and we worried about the ship’s safety, even drifting off shore, but the Malaysian government would not allow it to enter Malaysian water. I tried to get permission to enter a neighboring country, to continue the rescue operation, but the governments of Thailand, Malaysia, and Indonesia would not grant me an entry visa. Even though I was on land, I found myself drifting on the sea and my life was one with the lives of the 800 refugees on board.

In that situation, I decided that I must practice the meditation topic: “If you want peace, peace is with you immediately,” and I was surprised to find myself quite calm, not afraid or worried about anything. I was not just careless-this was truly a peaceful state of mind. And in that state of mind, I was able to overcome this difficult situation. As long as I live, I will never forget those seconds of sitting meditation, those breaths, those mindful footsteps during that 24-hour period.

There were more problems than it seemed possible to solve in just 24 hours. Even in a whole lifetime, many of us complain that there is not enough time. How could so much be done in a mere 24 hours? Success came when I faced the problem directly. I vowed that if I could not have peace at that moment, I would never be able to have peace. If I could not be peaceful in the midst of danger, then the kind of peace I might have in simpler times would not mean anything. Without finding peace in the midst of difficulty, I would never know real peace. Practicing this topic, “If you want peace, peace is with you immediately,” I was able to resolve many problems, one after another, when that was what was needed.