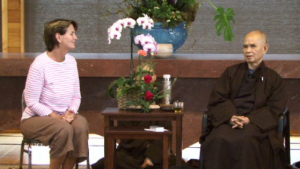 In September, during our first Thursday program, we saw two children who attended the August, 2013, Art of Suffering retreat at Blue Cliff Monastery ask questions of Thich Nhat Hanh. This Thursday evening, after our meditation period, we will watch another video segment from the Same Q and A in which two adults who were experiencing great suffering asked very poignant questions.

The first question was asked by a father whose son was among the twenty students killed at the Sandy Hook Elementary school in Newtown, Connecticut, in December, 2012. After describing the intensity of his suffering he inquired , "What could have prevented what happened that day? What could help prevent it in the future?"

Thich Nhat Hanh started his reply by encouraging us all to learn to transform the suffering, anger, and violence that is in each of us; that is how we begin:

If we do not do something, it will happen again somewhere else in America and in other places. There will be a young man or woman bringing a gun to the school and shooting. We have to see now there are potential young people like that. Your son is telling you that the person who did the killing was a victim. He did not know how to handle the suffering, the anger, the violence in him.

His teacher, his father, his mother, has not instructed him how to handle the energy of violence and anger in him. Sometimes he may be kind and sweet, but some times else he is pushed by the energy of violence, and anger and despair to do these kinds of things. When we look into a young person, we may see all these possibilities of being loving or of being violent. So your son is tell you and us that we should do something in order to prevent that to happen again. We should practice. We should know the way to handle the violence in us, and we should transmit that practice to the young generation.

The second question was asked by a mother who had lost her nineteen-year-old daughter to leukemia: “I try very hard to remember that she is with me, that she is in every cell in my body. But still I feel waves of such deep sorrow and longing. . . . Is it possible to ever truly be happy again?"

Thich Nhat Hanh comforted the mother and explained that the essence of her daughter is still to be found in the world, if she could look beyond appearances. (He also encouraged her to stay several months at a Plum Village Monastery where she might find two, three, or four new daughters.)

The other day we spoke about a cloud in the sky. When the cloud transforms herself into the rain, it is hard for you to recognize your cloud in the rain. You need to have the kind of eyes, the wisdom of signlessness, in order for you to recognize your beloved in her new form. She is there. If you know how to look deeply, she is still with you, she is still around. It is impossible for her to die. She just manifests herself in new forms. Look around.

If we are caught by our habit, we can only recognize her in her old form, appearance. And that is why we suffer. But if we are open, if we can see our cloud in the rain, we can stop our suffering and we can restore our joy.

You are invited to join us this Thursday for the meditation, the video segments, and the Dharma discussion.