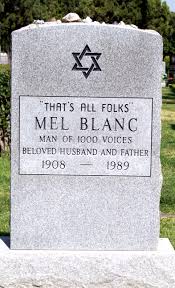 Mel Blanc, who was the voice of Foghorn Leghorn (Wikipedia)

When we learn how to suffer well, we suffer much less. However, learning to skillfully suffer can be challenging because we are frequently plagued with old thought patterns and habit energies that are deeply embedded and can be challenging to overcome or even notice. One of the simplest and most powerful tools that I have experienced as a technique for relieving suffering is laughter, and in particular learning to laugh at myself. The simple process of laughing gently at the realization of an old thought pattern can be very helpful in relieving suffering. In fact, in my own practice I often experience laughter as the ultimate realization of mindfulness. To laugh is to realize something in the moment, to “get it,” and laughter is an expression of that mindful realization.

I learned an important lesson about using laughter when I was in my early twenties. At this age, I was completely overwhelmed by fear. I lived in a very small world where it felt like everything was going to implode at any minute, and I was particularly afraid of women. In fact, I was so afraid of women that I simply could not talk to a woman that I didn’t already know without going into a panic attack. When I occasionally mustered up enough courage to attempt a conversation, I would inevitably be derailed by the voices in my own head that said things like “You are not worthy of her” or “Why would she want to have anything to do with someone like you?” or “You are fat and ugly and no one likes you” or “You are not worthy of a good relationship” or “You are flawed and cannot be trusted.” These thoughts left me feeling defeated.

Fortunately, because of a recommendation from a relative, I started going to weekly appointments with a wonderful licensed social worker who helped me work through my fears and take on my self-defeating inner dialogue. One of the first things he suggested that I do was to replace the self-critical voices in my head with the voice of a cartoon character. The cartoon character that immediately came to mind was the big chicken, Foghorn Leghorn! It made sense to me that, since it was mostly fear that was hindering me, the voice of a giant chicken would be perfect. And, if you have ever seen a cartoon with this giant chicken, you have surely seen him try to talk some other innocent character into doing his dirty work for him!

A conniving chicken; it seemed to fit my fear just right. When I thought of Foghorn Leghorn, the first line that came to mind was: “I say boy, I say boy, I got a proposition for you, boy.” However, an internet search revealed a few more humorous quotes from this giant chicken: 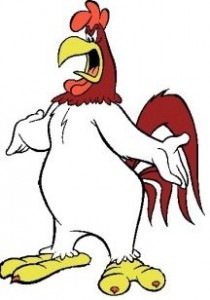 “That boy’s as timid as a canary at a cat show.”

“That woman’s as cold as a nudist on an iceberg.”

“That kid’s about as sharp as a pound of wet liver.”

This voice was perfect! When I imagined this voice as the sound track to those devastating old tapes, I was instantly able to separate them into thoughts that were occurring—tapes that were playing—and not the truth of what was happening. I could just imagine that big chicken saying, “I say, boy, pay attention when I’m talkin’ to ya, boy, I say you are no good, boy, no woman would ever want anything to do with you, boy.” This simple, humorous trick helped me to mindfully realize when these thoughts were occurring and gave me the opportunity to separate myself from them as more of an observer and less of a servant to them. Through this process, I was able to gently laugh when I realized that these tapes were running, and over time, these thoughts became more and more reduced along with the suffering that listening to these thoughts had caused me.

It is important to note that while laughter can be curative, we all know of examples where laughter has created suffering when it has been used to make fun of, to ridicule, or to make someone feel separate from others. Therefore, tempering our sense of humor with the Five Mindfulness Trainings, particularly the fourth training, Loving Speech and Deep Listening, is an important aspect of humor.

This Thursday evening after our regular sitting we will explore the ways that we cultivate humor and laughter in our lives and discuss how humor and laughter can be used to increase mindfulness and reduce our suffering and the suffering of others while addressing the following topics:

You are invited to bring your humorous stories, jokes, poems, gathas, and strategies for using humor and laughter to relieve suffering. Please consider the Fourth Mindfulness Training: Loving Speech and Deep Listening when making your selection! Below are a few thoughts on humor and laughter in the Buddhist tradition.

I hope you can join us,

Meditation is to be aware of what is going on—in our bodies, in our feelings, in our minds, and in the world. Each day 40,000 children die of hunger. The superpowers now have more than 50,000 nuclear warheads, enough to destroy our planet many times. Yet the sunrise is beautiful, and the rose that bloomed this morning along the wall is a miracle. Life is both dreadful and wonderful. To practice meditation is to be in touch with both aspects. Please do not think we must be solemn in order to meditate. In fact, to meditate well, we have to smile a lot.

Humor is a wonderful way to deal with our suffering because if we can laugh at our troubles, we can feel better. Thich Nhat Hanh is a special man who has helped millions with their suffering with incredible technique. But he doesn’t know real suffering, because he has not dated as much as I have.

There is a story I would like to tell you about a woman who practices the invocation of the Buddha Amitabha’s name. She is very tough, and she practices the invocation three times daily, using a wooden drum and a bell, reciting, “Namo Amitabha Buddha” for one hour each time. When she arrives at one thousand times, she invites the bell to sound. (In Vietnamese, we don’t say “strike” or “hit” a bell.) Although she has been doing this for ten years, her personality has not changed. She is still quite mean, shouting at people all the time.

A friend wanted to teach her a lesson, so one afternoon when she had just lit the incense, invited the bell to sound three times, and was beginning to recite “Namo Amitabha Buddha,” he came to her door, and said, “Mrs. Nguyen, Mrs. Nguyen!” She found it very annoying because this was her time of practice, but he just stood at the front gate shouting her name. She said to herself, “I have to struggle against my anger, so I will ignore that,” and she went on, “Namo Amitabha Buddha, Namo Amitabha Buddha.”

She could not bear it any longer. She threw away the bell and the drum. She slammed the door, went out to the gate and said, “Why, why do you behave like that? Why do you call my name hundreds of times like that?” The gentleman smiled at her and said, “I just called your name for ten minutes, and you are so angry. You have been calling the Buddha’s name for ten years. Think how angry he must be!”