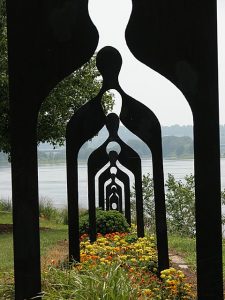 In October of 2013 Thich Nhat Hanh (Thay) was invited to talk at Stanford University’s Center for Compassion and Altruism Research and Education. Dr. James Doty, a neurosurgeon and the founding director of the center, introduced Thay and asked several questions, including one that many are asking today:

I think one of the challenges for many people is that there is so much suffering. For example, I’m a doctor and one of the things that happens to doctors—and especially to people in the caring professions—is they get overwhelmed with suffering, as does the average person. And they say, “There’s so much suffering, what can I do?”

Doty’s question launched Thay into a hour-long explanation of mindfulness practice and suffering, focused especially on nourishing joy and touching our own suffering. Thay noted:

Mindfulness practice can help you to go home to yourself in order to get in touch with the pain, the suffering, the despair, the anger, and the violence inside. With the energy of mindfulness and insight, you know how to handle the suffering within yourself. You have compassion toward yourself. Love for another person depends on your capacity to love yourself. If you don’t know how to love yourself and take care of yourself, how can you love and take care of another person? So, the practitioner learns how to suffer— how to handle the pain and suffering inside of himself or herself. And because he knows how to do that with compassion, with insight, with mindfulness, he can suffer much less than other people who do not know the practice. And he can go further. He can make good use of the suffering in order to create something more positive, like understanding and compassion.

It is a wonderfully hopeful and helpful talk. For the most part, the teachings are familiar to those of us who have practiced in the Plum Village tradition and have read Thay’s books. However, one part of the talk unexpectedly grabbed my attention:

For the past few weeks my wife and I have been watching “Shtisel,” an Israeli dramatic series thats explores the personal lives of a Hasidic family in an ultra-orthodox Jerusalem neighborhood. In each episode Shulem, the family patriarch, and his children and grandchildren try to create a better life for themselves and their families. Often, however, their actions result in suffering and discord for themselves and those around them.

What unsettles me about the series is how familiar it all seems, even though the Jewish family I grew up was non-religious and eight thousand miles away from Jerusalem. Sometimes the familiarity is in the small details, such as the food and the dreariness of the household ornamentation. But mainly it is in the interaction among the family members that reminds me of my family of origin. The interactions often seem driven by a person’s inability to take care of their difficult emotion, which frequently then express themselves as blame and manipulation, lying and deception, or a lack of insight and empathy.

When I was younger I was often angry at my parents. From my perspective, they were responsible for the dysfunctions of our family life, and, therefore, responsible for my inability to achieve what I wanted or to find my place in the world. I will always be grateful to Thay for teaching me to embrace them, with all their faults and also their strengths. He helped me see how my grandparents struggled, and passed their pain and their defensiveness on to my parents. I learned to empathize with them rather than blame them.

Shtisel motivated me to look even deeper. The great-grandfather of Shulem, the Shtisel patriarch, presumably would have grown up not far from my great-grandparents in Eastern Europe. More importantly, it is likely that the actual great-grandparents of the non-Hassidic Israeli Jews who wrote, directed, and acted in Shtisel grew up there, too. Our 19th century Jewish ancestors lived through wars and pogroms, with oppressive conditions all around them. They did the best they could with what they had. They survived, though many were scarred by their experiences. Their ways of perceiving and responding were passed on from generation to generation. (Family systems theory calls it the “multi-generational transmission of emotional processes.”)

I received the transmission in Los Angeles. The creators of Shtisel received it in Israel. In developing the characters and storyline the writers and directors drew upon a particular set of emotional processes that I believe they had experienced in their families and struggled with. Because of our common emotional ancestry and common struggles the Shtisel family drama is for me both disquieting and fascinating.