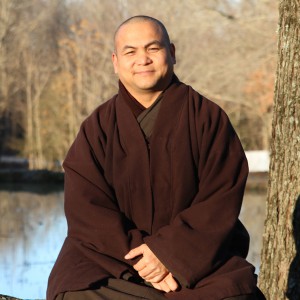 Eventually, he found his way back to a spiritual path, attending a retreat at Plum Village in France in 2002 and staying on to ordain as a monastic. Phap Uyen received full ordination in 2007, and has been a Dharma teacher since 2010. He currently resides at Plum Village's Magnolia Grove Monastery in Batesville, Mississippi.

The suggested dana (donation) is $40-$70. Dana is a gift from the heart that supports the community and the teachings. Please feel free to contribute less or more according to your circumstances. Please wear comfortable clothesand and bring:

a bag lunch and snacks for yourself, and maybe a treat to share with a few others
a mat and cushion if you would like to sit on the floor (however, there are lots of chairs at Seekers Church)
a yoga mat or blanket for total relaxation
Register now. If you have questions, please please contact our registrar, Gene Klinger: gklinger@verizon.net or (240) 731-3732. For directions to the Seekers Church go to www.seekerschurch.org

We hope you can join us. Please pass this notice on to friends or groups you think might be interested in joining with us.

Brother Michael will also be joining the Still Water community on August 2nd for its annual day Lotuses, Food, and Mindful Friends event.