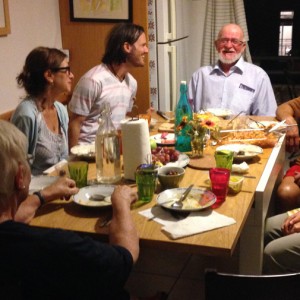 A group of practitioners from the Still Water Mindfulness Practice Center is offering retreats and events in Israel from October 15 to November 7, 2016.

On October 12th Ann-Mari and I flew from DC to Tel Aviv (changing planes in Brussels). Lynda Martin-McCormick, a long time Still Water practitioner now living in Portland, Oregon, flew with us. We settled into a comfortable AirBnB apartment in the Baka area of Jerusalem. We were joined the next day by Carlos Munoz, and the day after by Mick Neustadt.

Our interests for the first few days were adjusting to the 7 hour time difference, meeting with the Israeli organizers of our visit, and some walking and sight-seeing in Jerusalem. All went well.

A high point for me was visiting the Shrine of the Book / Dead Sea Scrolls exhibit at the Israel Museum. The story of the 981 texts that were preserved and recovered 2000 years later is a fascinating glimpse of the community of the Essenes. Much reminded me of Plum Village:

Philo, a Greek-Jewish philosopher who visited the Essenes wrote:

They live together in clubs, bands of comradeship with common meals, and never cease to conduct all their affairs to serve the common weal.

From Jerusalem we traveled to Neve Wahat Al-Salam – Neve Shalom – Oasis of Peace, where we would have a six-day retreat. WAS-NS is an intentional community of Arab and Jewish citizens of Israel established by Bruno Hussar, a charismatic Dominican Priest. The community has one of the few bi-lingual (Arabic – Hebrew) and bi-national schools in Israel and offers peace education programs with students and adults throughout Israel.

On the evening before the retreat began, the Jewish-Palestinian WomenWagePeace movement had a rally at Neve Shalom. The movement’s objective is to create a groundswell of support to force the primarily male leaders of Israel and Palestine to negotiate a peace. How they do it is up to the leaders. The keynote speaker was Nobel Peace Prize Laureate Leymah Gbowee of Women of Liberia Mass Action for Peace.  Her short talk at the rally was encouraging, sobering, and electrifying. (The link to the video of the entire evening rally is here. The rally is under the title “17.10.16.”  Gbowee’s 10-minute talk starts at 1:25.)