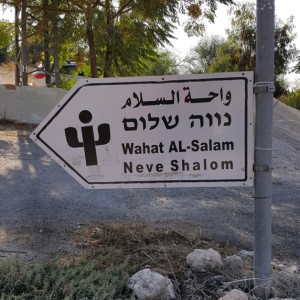 The “main event” of our Still Water tour in Israel and Palestine was a six-day, five-night retreat at the Oasis of Peace – Neve Shalom – Wahat al-Salam intentional community and conference center.

Six months earlier, when I first began working with the organizers, they mentioned that they especially wanted a retreat that would help experienced practitioners deepen their practice. Based on that stated interest, we made two decisions:

The retreat was planned for the Succoth holiday. About 65 practitioners signed up from all over Israel. Most or the retreatants were long term practitioners. Some had been practicing a year or two, and a few were very new to mindfulness practice.

The retreatants were mostly of Jewish background, but there were a few Palestinians with Israeli citizenship, and also a few practitioners from other countries. (Palestinians from the West Bank and Gaza would have been welcome. Later in our visit we made over-night stays in two cities on the West Bank, met with practitioners, and offered a Day of Mindfulness.)

I began my first talk relating my struggles, beginning as a child, to find meaning and direction in life. Though outwardly I was doing pretty well, inside I felt separated from people and the life around me. I felt empty in a way few people seemed to understand. I was a hungry ghost, to use the term I later learned from Thich Nhat Hanh.

In mid-life, when on a professional work trip, I had the chance to spend a week at a Buddhist Monastery in Thailand. Finally I found people who seemed to understanding the spiritual lack I was feeling. Rather than cognitive answers, the monks gave me practices to do, especially sitting and walking meditation. I learned that what I had always accepted as just the way my mind worked could with mindfulness practice be changed. It was a revelation. A year later, in 1990, I met Thay. I was touched by his deep sense of presence. And I was attracted to the way he encouraged all his students, whether monastic or lay, to live each day with wonder, energy and purpose.

I also shared during the first Dharma talk that many years ago I heard Thay explain that there are basically three ways to meditate and that they are similar to how we work with the mail that comes to us each day.

One way is to sort through the mail noticing who the senders are. Here’s a letter from my sister, here’s a bill from the phone company, and so on. We relax, note each letter, and enjoy the present moment. I call it “the direct way.” For me, it is wonderfully expressed in 13th century poem from Keizan Zenji:

Abandoning myself to breathing out
and letting breathing in naturally fill me
all that is left is an empty zafu
under the vast sky
the weight of a flame.

A second way to working with the mail is to decide to open one of the letters and see what it has to say. I call it “Widening Our View.” There are thousands of ways to focus on particular aspects of our experience or particular teachings. We can bring them into our sitting and walking meditation, experience them more fully, and look deeply into them.

During the retreat, as mentioned above, I focused especially on the the 16 exercises taught in the Mindfulness with Breathing (Anapanasati) Sutra. The exercises are a progressive series through which we calm our senses and our minds so that we can deeply investigate and understand the world that is in us and around us. The exercises are a favorite of Thich Nhat Hanh. He often says that when he found them, it was the happiest day of his life. (I will not elaborate here on the details of each talk. However, for those interested, the handouts will provide a sense of my way of working with the exercises and how they link together.)

A third way of working with the mail occurs when we are doing something else, or intending to do something else, and a messenger rings the doorbell the an express letter. We go to the door, get the letter, and open. I call the way of working with the mail “A Spiritual Emergency.” Something has happened and we have strong energy in us, such as fear, anxiety, depression, excitement, anger, or despair. If we try to do anything else, such as calmly sort through the mail, the energy will break through. So rather than deny or distract ourselves from the energy, we turn toward it and invite it into our meditation practice.

The three methods of working with the mail are complementary. We move from one to the other depending on circumstances, interests, and our needs. Throughout the retreat questions came up about all three ways of practicing.

In addition to my talks and silent meals, each day we had