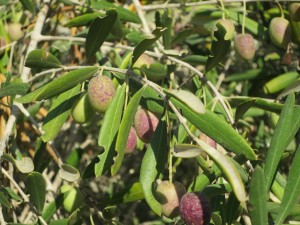 On the day after the six-day retreat the Still Water group traveled northeast from Neve Shalom – Wahat al-Salem. We drove through several check-points on our way to visit Issa Souf, a Palestinian peace activist who lives in the village of Har’es, near the city of Nablus. (Map of places visited during our Still Water visit.)

Issa has been to Plum Village twice: once, many years ago, with an Israeli-Palestinian dialogue group, and once in 2015 with his wife, their five children, and an assistant. (The Still Water community helped raise funds for the second trip, which is how I came to know him from a distance.)

In his youth Issa was a physical education trainer. In 2001, during the second Intifada, he received a call that Israeli troops were entering the village. He went out to warn neighboring families to bring their children inside. He was shot in the back by Israeli soldiers and immediately paralyzed. Initially, the soldiers prevented his family from coming to his assistance. He later received medical and rehabilitative treatment in Jordan and England, regaining as much self-sufficiency as his condition allows.

We were warmly welcomed into Issa’s family’s home, and sat together talking about his belief in non-violence. It makes sense to him: hate does not end hate, violence does not end violence. Three years after his injury he wrote an open letter to the soldier who shot him, saying that that he and the soldier are both victims: “I was a victim once, he is a victim ten times. It’s not easy to live your whole life with the feeling that you have killed someone. It’s not easy at all.” (An article about Issa and his letter were published in Haaretz in 2004.)

Issa also talked about the suffering of ordinary Palestinians, focusing on the members of his extended family. There is a huge disparity between the circumstances of the West Bank Palestinians and the daily lives of the Israelis living in the large settlements nearby. Palestinians must have a permit to leave the West Bank. Permits are issued only for specific purposes, such as specialized medical treatment. Palestinians must use rutted roads and pass through numerous check points, which often cause delays and add uncertainty to any trip, while Israelis travel on well-maintained highways with quick access to Israeli cities.

Policies regarding land use and title are particularly disparate. Settlements often include land taken from Palestinian individuals or municipalities, and are frequently guarded by soldiers. Settlers easily receive construction permits, while Palestinians rarely receive permission to build new homes, even on property they have owned for generations. Many Palestinians are cut off from their fields and olive groves by check-points, settlement incursion, or the West Bank barrier wall.

From time to time, while we talked, Issa’s children joined us, often to sit next to him or in his lap. We were touched by their shared gentleness and affection.

Several hours after we arrived, we were joined by Neta Golan, an Israeli non-violent peace activist with whom Issa has worked for decades. In 2001, with others, they founded the International Solidarity Movement, an organization that encourages non-violent activists to come to the West Bank to work with Palestinians, and to be witnesses to the realities of the occupation.

Neta was raised in an activist Israeli Jewish family that moved between Israel and Canada. In the late 1990s she joined an Israeli – Palestinian dialogue group. Her friendship with Nizer, a Palestinian participant, grew into a romantic relationship. They were asked to leave the group. Despite concerns from both their families they eventually married. For the past fifteen years Neta, Nizer, and their three daughters have lived in the West Bank, first in Ramallah, and for the past few years, in Nablus. Neta has had a long association with Plum Village, visiting many times, including a six months stay.

After a delicious vegetarian lunch at Issa’s, we headed off with Neta. We went first to an olive grove to meet a Palestinian couple and three International Solidarity Movement volunteers from Sweden, the US, and Italy. The volunteers were there both to help with the olive-picking and to discourage harassment from nearby settlers.

We visited the local plant where olive oil is pressed. Then we hopped on a municipal bus to Nablus. On the approach to the city we noticed the large red signs that notify Israelis in three languages that because the city is under the control of the Palestinian Authority, “Entrance For Israelis Is Forbidden, Dangerous To Your Lives, And Against Israeli Law.”

Nizer led us on an after-dark tour through the courtyards and arched stone passageways of the old city of Nablus, passing jasmine-covered doorways and stopping to see a friend’s restored Turkish bath house. We returned to the family’s apartment — on the top floor of what was once the guest house of the Ottoman governor of the region — for another delicious vegetarian meal.

By the time we finished dinner the sweet shop downstairs had closed; our hosts were disappointed to offer us coffee without kanafeh, a Nablus specialty. At 10 pm we headed by taxi back to Issa’s house, where we were met with a tray of warm kanafeh. Issa had gone out with his teenage son to buy some from a still-open shop in Har’es, so that we wouldn’t miss tasting the renowned local dessert.

The next morning we had tea, pita, and za’atar with Issa, went to see the nearby barrier wall, and walked with a friend of his through the historic city of Deir Istiya, where people have lived since 1300 BCE.

At noon we boarded a mini-bus, chartered for us from East Jerusalem and licensed to drive on the Israeli settlement roads, to travel to the Israeli border and then on to Tel Aviv. We were stopped and questioned, first by a border guard and then by a supervisor, about where we had been. We explained that we were part of a meditation group from the US and had been visiting a friend in Har’es. The supervisor sighed, seemed to roll her eyes, and then said, “OK, you can go.” I think it was an explanation she doesn’t hear very often.