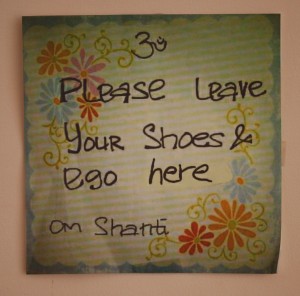 On Friday, Oct 28, the Still Water group left Tel Aviv to join a meeting of the Israeli mindfulness community at Neve Shalom – Wahat al-Salem, the intentional community where we had the six-day retreat. About 31 of us met in the meeting room at the community’s Spiritual Center. Six of us were from Still Water (Tim McCormack had arrived the night before), and about twenty-five were from city and small town mindfulness communities in Israel.

The focus was on Sangha building: how to create inclusive, vibrant, and welcoming local communities and also a larger “community of communities” that could organize retreats, classes, and other events and could support local communities and facilitators when needed. The Still Water group shared its history and experience. The Israel Sangha asked questions and explored what elements, such as training of new local facilitators, or weekly announcements, might be most useful for the Israeli community.

In the afternoon, Israeli friends drove us the short distance to Beit Jala, in the West Bank. A quirk of jurisdictional boundaries allows residents of Israel and the West Bank to meet there without passing through check points. (See Map). Within a few minutes we transferred ourselves and our baggage from our Israeli hosts’ cars to the cars of our new acquaintances Eilda and Nimala, the founders of the Beit Ashams Yoga Studio and Mindfulness Center in Beit Jala, adjoining Bethlehem.

A few minutes later we were at the yoga studio and transferring to the cars of our hosts. Eilda and Nimala had arranged for us to stay with two host families in Bethlehem, acquaintances who rent out extra apartments, sometimes through AirBnb. Arrangements were made that we would also eat breakfast and dinner with our host families. In the house where Ann-Mari and I stayed, the family members were Palestinian Roman Catholics. They were accustomed to foreign visitors and the whole family, included the three teen-age girls, spoke English. In the three days we spent with them we had many conversations over the kitchen table.

It was soon apparent that our hosts were a close family whose lives center around the success of their children, their extended family, and their church. Though they live only six miles from Jerusalem, because of the separation wall they have not been able to go there, even to visit relatives, for more than 10 years. Nor have they been able to tend to family-owned olive groves that lie just on the other side of the Israeli checkpoint. At the same time, their worldview is wide. They are all avid users of the internet, particularly Facebook. The daughters use all the smart phone apps that teenagers in Maryland use. And they have had opportunities to travel, though not to Israel. Last year, with the sponsorship of a Catholic parish in the Mid-West, the family had a month-long vacation in the US.

The Day of Mindfulness on Saturday, October 29th, amazed everyone in our Still Water group. The theme we had planned for the day was “Everyday Happiness,”  focusing on sitting and walking meditation and mindfulness in daily life. Eilda and Nimala publicized the day through their yoga studio and through contacts they had throughout the West Bank.

Not counting Eilda, Nimala, and our Still Water group, there were 24 participants. Most were from Bethlehem, or nearby, but several carloads of participants had driven in from Ramallah and Hebron. About seventy five percent were women. Many spoke excellent English, and some spoke very little English.

As I often do in public talks, I began the day by clarifying what I meant by mindfulness. I spoke in English; Eilda or Nimala translated into Arabic. I wrote “Present Moment Awareness,” “Concentration” and “Insight – Wisdom – Discernment” on a white board; Eilda or Nimala wrote the Arabic translation alongside. 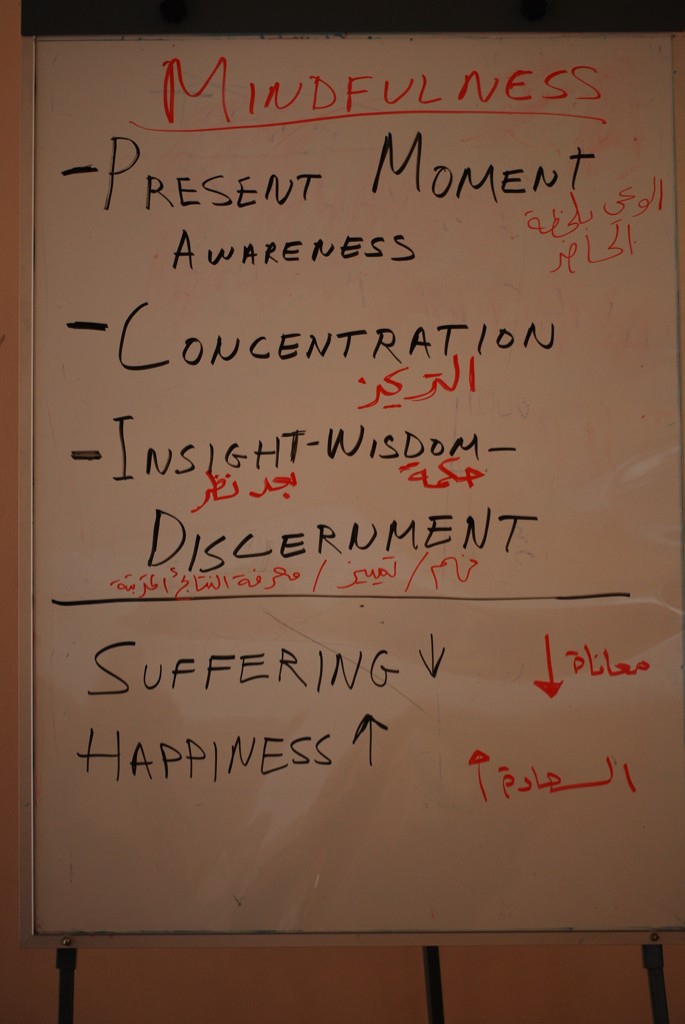 It took only a few minutes and a few questions to realize there was a fresh and focused energy in the room. It was apparent that this topic was important to participants, and they wanted to learn all they could at this day of mindfulness. Some had been teaching themselves mindfulness through the internet and through books. They had stored up questions for a day like this. 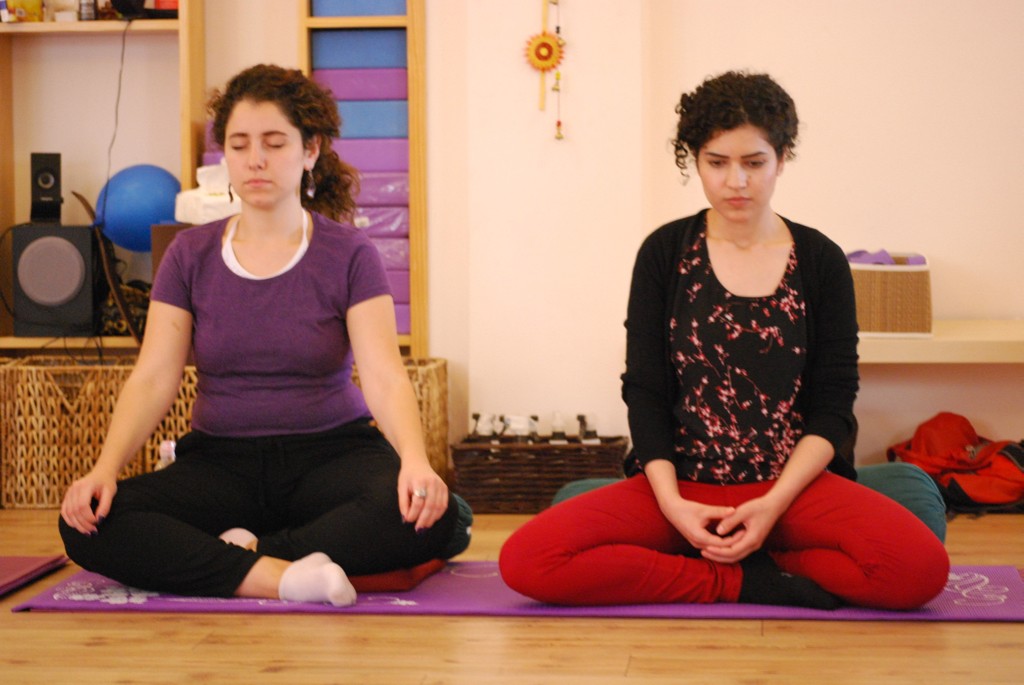 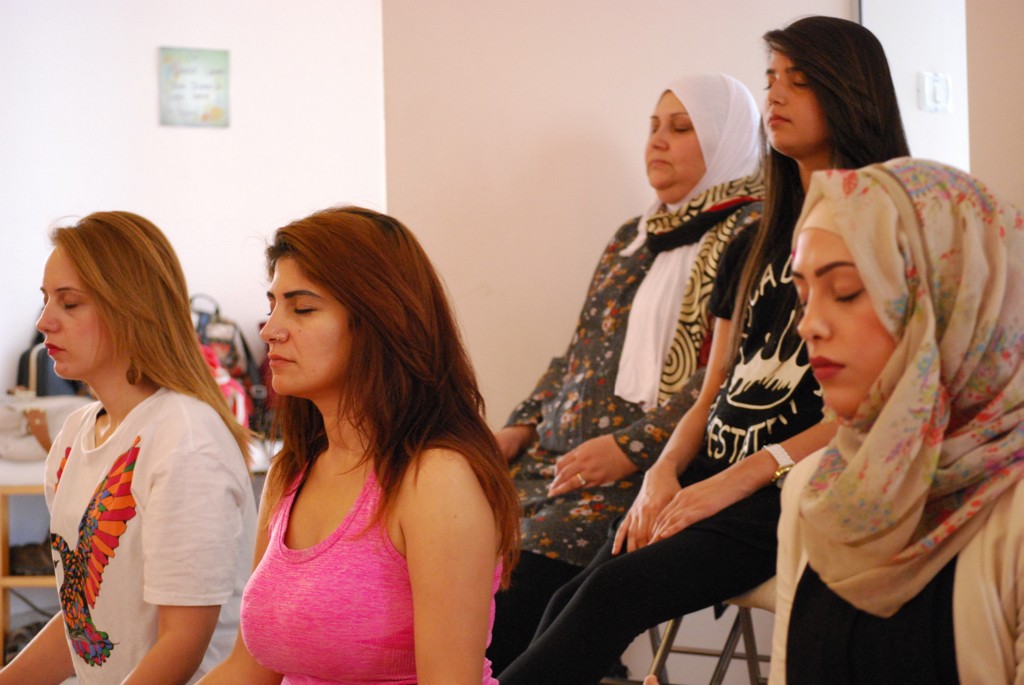 The morning flew by. We then had a pleasant potluck lunch that allowed participants to get to know each other, and for us to get to know a few people, too. A woman sitting next to Tim at lunch asked him if he was a Christian.  He replied that he had been raised Catholic. She thought for a few second and then said, “So, you were raised a Christian, but you are not anymore?” When Tim said yes, he no longer identifies as a Christian. She nodded and said, “Good for you. I was raised a Muslim, but I’m not a Muslim anymore.”

The afternoon started with Deep Relaxation, taught by Mick, and then teachings on working with difficult emotions and mindfulness in everyday life. In writing this blog entry I listened again to a recording of the end of the afternoon session. What stood out for me was the laughter, joy, ease, and mutual appreciation. As I said, an amazing day.

After the event was over, the Still Water group went with Nimala to a cafe for tea. While walking there, I asked her how our day of Mindfulness compared to the two or three other Days of Mindfulness they had had in Bethlehem.. She replied, “Your teaching was simpler and more practical.”